Birds that Eat Nuts: Top 13 Most Common with Pictures

Nuts are a high-calorie source of healthy fat that not only keep birds’ skin and feathers healthy but also provide them plenty of energy to fly and forage all day.

Whether it’s whole nuts, shelled nuts, or nut pieces, birds go ga-ga for them. However, it’s important to note that not all birds like eating nuts, and even those that do sometimes eat specific kinds of nuts. It really depends on their bill shape and overall dietary needs.

In this article, I’ve listed some of the most common birds that eat nuts, including what and how to feed them. Let’s dive right in!

American Robins are one of the most common backyard birds in North America. You’ve likely seen one or two of them in your backyard already! They’re often seen digging out earthworms with their bills or hopping on the ground, foraging for fallen nuts and berries.

These lively birds frequent backyard feeders regularly, especially during winter. They favor mealworms, fruit, and seeds, but they won’t say no to crushed peanuts, almonds, cashews, walnuts, and hazelnuts. They’re one of the most common birds that eat nuts.

Author Note: They also have quite the sweet tooth, so if you can spare some fruits, berries, pastry dough, or even leftover sweetcakes, they’d thank you for them!

With a name like Acorn Woodpecker, it really comes as no surprise that these speedy birds adore nuts. They search for nuts morning and night, regardless of the turn of the season! They’re another one of the most common birds that eat nuts.

Acorn Woodpeckers are robin-sized birds with a red cap, a creamy white face, and a mostly black plumage. They live in large groups, dozens at a time, and hoard hundreds of acorns.

They wedge the acorns they find into the holes they’ve made in tree trunks or, if no trees are around, telephone poles. Doing so not only allows the acorns to dry out but also protects them from other acorn-loving animals (like squirrels).

During spring, Acorn Woodpeckers indulge in insects and berries. When fall and winter comes, they’d dig into their stock of acorns. Acorns actually make up about half of their annual diet, which is quite fitting considering their name.

If you want to lure Acorn Woodpeckers to your backyard, simply fill your feeder with—you guessed it—acorns! They also like Brazil nuts, macadamia nuts, and walnuts.

With over 630 million individuals in the US alone, Dark-eyed Juncos can be spotted in all parts of the continent, from sunny Miami to the freezing depths of Alaska. They’re an extremely common sight in backyard feeders, easily recognized by their crisp markings and white tail feathers.

Top Tip: Dark-eyed Juncos mostly feed on seeds and insects, but they go crazy for peanuts. Just make sure they’re shelled and crushed so the peanuts fit their tiny mouths!

They aren’t particularly rare but they’re not as common as some of the other birds on this list, so if you spot one or two in your backyard, consider yourself lucky!

According to the Cornell Lab of Ornithology, their fondness for acorns helps the spread of oak trees during and after the glacial period. Without them, oak trees might very well be extinct!

Blue Jays fly with at least three acorns when in flight: one in their throat, one in their mouth, and one halfway in their bill. They’d travel up to a mile and a half away from the parent tree and not only dump the acorns in a pile, but also bury them in various places individually. This earned them the nickname, “Acorn Planters.”

Blue Jays treat acorns like their bread and butter, so to speak. But since they’re omnivores, they also indulge in insects from time to time. Their diet is mostly composed of vegetable matter and nuts, though.

Apart from acorns (which they can easily crack open with their strong bills), Blue Jays eat shelled peanuts, beechnuts, macadamia nuts, pine nuts, pecans, and Brazil nuts. As long as it’s a type of nut, they’ll eat it!

Clark’s Nutcrackers, also known as Woodpecker Crows or Clark’s Crows, are passerine birds with pale gray plumage, black wings, and whitish faces. They’re native to the western part of North America and live in areas with little to no human contact.

Named after famous explorer William Clark during the Lewis and Clark expedition in the 1800s, these introvert birds crack nuts and pine cones with their long, sharp bills. They love eating large nuts such as peanuts and pine nuts.

Although they rarely visit backyards, they do sometimes visit feeders in mountainous locations.

Native in the western half of North America, Black-billed Magpies are dressed to impress with their flashy appearance.

These inquisitive birds have a varied diet. They’d eat anything they could get their non-existent hands-on, including fruits, grains, berries, small animals, insects, and even carrion.

Black-billed Magpies are one of the new North American birds that build dome-shaped nests near the top of trees.

Found in deciduous and mixed forests, Black-capped Chickadees are nonmigratory passerine birds that belong to the tit family.

Black-capped Chickadees are the official state bird of not one, but two states: Massachusetts and Maine. They’re also the provincial bird of one of the ten provinces of Canada, New Brunswick.

The fact that they’re so popular doesn’t really come as a surprise; after all, Black-capped Chickadees are as adorable as can be! With oversized round heads, striped white cheeks, and super tiny bodies (only 4.5 to 5.9 inches on average!), it’s easy to fall in love at first sight with these small creatures.

Black-capped Chickadees are among the easiest birds to attract to feeders. They are incredibly curious and don’t mind hanging out with humans, so they visit feeders whenever they have the chance. They love eating high-fat, energy-dense foods, like peanuts, hemlock tree nuts, birch nuts, and walnuts.

Carolina Wrens are the very definition of small but powerful. When I say powerful, I don’t mean it in terms of strength; I mean in vocal cords. These tiny creatures pack a surprising number of decibels under their belts. In fact, they deliver one of the loudest songs per volume of birds. Their piercing exclamations can quite literally be heard from miles away.

These small but vocal creatures live in the eastern half of the US, the southern half of Ontario, Canada, and the northeastern half of Mexico. They’re quite common across their range, with over 22,500 individuals.

Top Tip: Carolina Wrens primarily feed on insects like grasshoppers, caterpillars, crickets, and the like. When winter comes, they eat berries, small fruits, and nuts.

Carolina Wrens mostly feed on feeders during winter. Fill your feeders with peanuts and/or peanut hearts and they’ll be happy campers!

Brown Creepers, sometimes referred to as American Treecreepers, are small woodland songbirds that, as the name suggests, creep in upward spirals on tree trunks. They probe their slender down-curved bills into the crevices of trees in search of fat, juicy insects.

These tiny songbirds are the only native species of treecreeper in the US and across North America. They’re relatively common, but often heard rather than seen.

Brown Creepers mostly eat insects, but they won’t say no to nuts—especially peanuts—during winter. They also love the taste of peanut butter!

Tufted Titmice are frequent backyard feeder visitors. Although small, they’re quite assertive. They oftentimes push other birds off the feeder so they can take their fill.

They favor sunflower seeds the most, but they’ll also eat peanuts (both whole and crushed), beechnuts, and acorns.

Common Grackles are large raven-like icterid found in massive numbers throughout North America. But although there are approximately 103.5 million of them as per the IUCN Red List, this species is classified under Near Threatened (NT).

Author Note: Their numbers are decreasing rapidly, having undergone a population reduction of about 50% since 1970.

Luckily, Common Grackles are a fairly common sight in backyard feeders, especially during migration. They eat nearly anything they can get their beaks on, including food crumbs you dropped on the sidewalk. They’d even eat garbage if they can’t find anything fresher.

Although they aren’t picky eaters, Common Grackles would (probably) give their left leg in exchange for whole peanuts. Whether it’s in the shell or just the hearts, they’d eat them right up. They also eat acorns and walnuts.

Steller’s Jays, also known as Mountain Jays, Long-crested Jays, or Pine Jays, are the only crested jays that live west of the Rocky Mountains. They’re closely related to Blue Jays, except they live in western North America rather than eastern North America. They are also seen in the mountainous regions of Central America.

Steller’s Jays aren’t as common as Blue Jays, but they’re not especially difficult to find. They’re mostly spotted in agricultural areas and residential areas with nearby forests at elevations of 3,000-10,000 feet.

Eastern Towhees are plump, oversized sparrows that live year-round in the Southeast and Midwest. They share a striking resemblance to Spotted Towhees, so much so that they were once considered a single species.

Author Note: Eastern Towhees are common but secretive. They rarely sing outside their mating season, so they’re often difficult to find. They’re mostly spotted by the sound of their scratching under leaves.

If you’ve got overgrown, shrubby, or brushy borders, Eastern Towhees would likely visit your backyard. They eat acorns, peanuts pieces, and other small nuts of the same variety.

Nuts are nutritious, energy-filled foods that almost every bird (sans birds of prey) like eating. Whether it’s peanuts, hazelnuts, or walnuts, they go coo-coo for them! We hope you enjoyed our guide on birds that eat nuts.

Nuts are a rich source of vitamins, protein, and healthy fats, all of which contribute to the health and vitality of birds. Plus, they provide hours of feeder entertainment! Watching birds crack open shelled peanuts or wrestle with large nuts sounds like a good time to spend the afternoon to me!

Prev
Where Do Owls Sleep During the Day? Comprehensive Guide 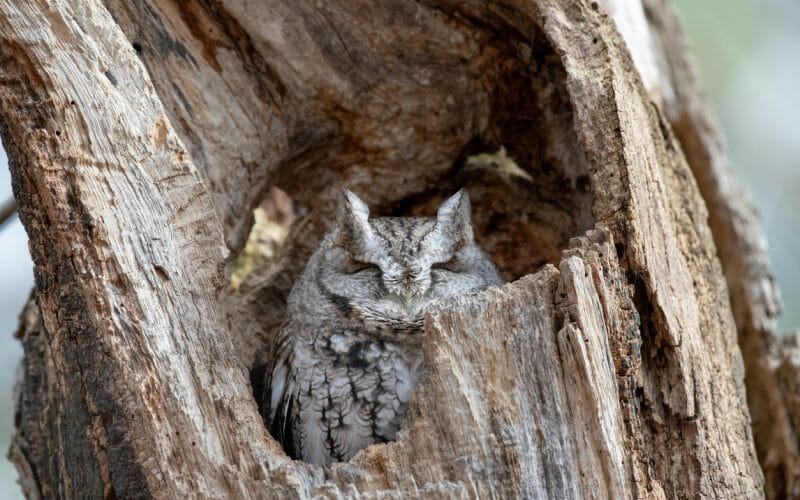 Next
Birds that Make a Clicking Sound: 13 Most Common with Pictures 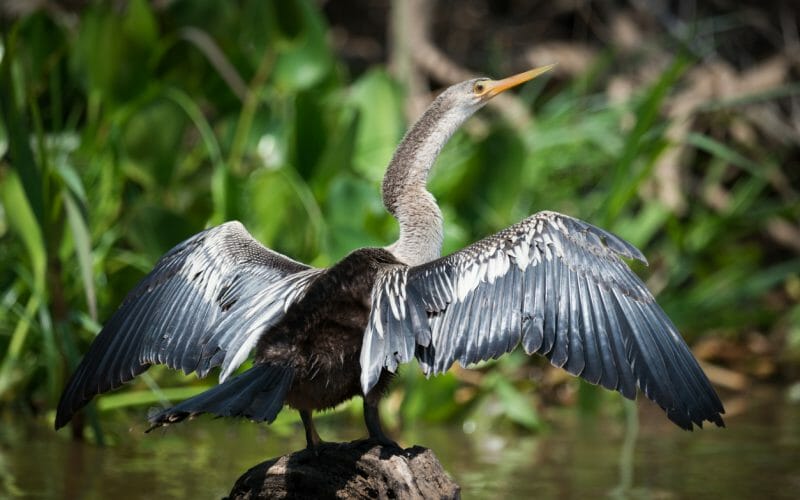 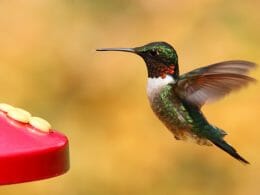 Sideways, backward, forward, up, and down, hummingbirds are always on the move 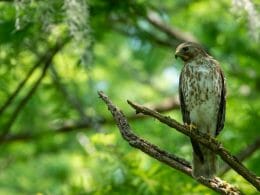 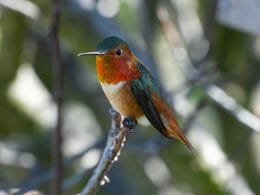 Hummingbirds in Texas: 19 Species to Spot in The Lone Star State

If you’re interested in bird watching, Texas should be on your must-visit 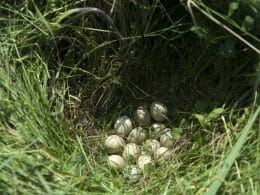 Birds That Make Nests on the Ground: Top 19 with Pictures

Did you know that many birds nest on the ground?