The first name makes sense as most people are aware that Florida has some of the most beautiful beaches in North America.

The second one refers to the huge population of alligators that live across Florida’s marshes and swamps.

But, Florida is also famous for its amazing birds, as there are currently 536 bird species that live in Florida permanently or visit it during the migration season.

In this article, we’ll focus on the blue birds in Florida. So, keep on reading to learn more about them.

12 Blue Birds in Florida to Watch and Study

The bright colors in the birds’ feathers are either formed by pigments or caused by light refraction.

Colorful plumage can help birds attract mates or hide from predators. The plumage can also be the bird’s clue to identify its own kind.

Here are 12 amazing blue birds that you can spot in different parts of Florida.

The Florida Scrub-Jay is nowhere else to be found in the world, and it inhabits the scrubby flatwoods in Florida, where it’s federally protected. It’s one of the most common species of blue birds in Florida

It has a dull blue overall with a whitish head and can usually be seen hopping on the ground.

Author Note: These birds have extended families where the young birds come the following year to help the parents with the new brood. Individuals take turns watching out for hawks while other family members look for food.

Your best chance to see one is to visit the Merritt Island National Wildlife Refuge or Archbold Biological Station, where there are protected populations of the Florida Scrub-Jay. It feeds on small insects and berries and hides acorns in the sandy soil to eat them later.

The Tufted Titmouse is quite common in Central Florida, where it doesn’t migrate. Birds are usually silver-gray with a faint blue hue and a white below. The birds also have a black patch above the bill. It’s another one of the most common blue birds in Florida.

This little songbird is usually seen in the outer branches of woods, public parks, and backyards. It usually travels with mixed flocks.

You can easily attract a Tufted Titmouse to your bird feeder by providing food in winter. It prefers sunflower seeds but will also eat peanuts and suet.

This bird mainly feeds on insects in the summer and can also eat berries, nuts, seeds, and acorns, usually going for the biggest ones while foraging.

The Boat-Tailed Grackle is found in coastal saltwater marshes and inland waters. It usually lays its eggs in shrubs or trees near the water and can be seen feeding across the shoreline.

The male birds are glossy black blue all over, while the females look brownish. This bird will come to your backyard if you fill a platform feeder with sunflower seeds, millet, corn, and other bird seeds.

The Boat-Tailed Grackle has well adapted to the presence of humans and can be seen in parks and around dumpsters where it scavenges for food remains.

It eats crustaceans, arthropods, mollusks, small reptiles and amphibians, seeds, fruits, and even tubers. It’s also known to steal food from other birds and from humans.

The Blue Jay can be found in different parts of Florida, except in the south. The bird has a white below with different shades of blue, black, and white on the above.

This bird prefers tray and hopper feeders, especially if they’re filled with peanuts, suet, and sunflower seeds. It can be seen across the shoreline, or you can detect it by listening to its noisy calls.

Author Note: Blue Jays have a mysterious migration pattern, as some of them stay where they are while others migrate. In some cases, young birds are more likely to migrate than adults, and scientists are yet to discover the reason why they do this.

The Blue Jay feeds on insects, nuts, and dead or injured small vertebrates. In addition, it sometimes raids the nests of other birds to feed on the eggs and nestlings.

Common Grackles are usually found in the wetlands and marshes of Florida. These birds are usually seen walking in fields and lawns or gathering in noisy groups on trees.

The Common Grackle looks black from a distance, but as you get closer, you’ll be able to see the iridescent bronzy body and the blue-purple head. Female birds look less glossy than males.

This bird comes to bird feeders to feed on mixed grains and seeds. You can also spread the grains on the ground because this is where it prefers to feed.

The Eastern Bluebird prefers to live in the open, freshly mowed grassy areas, where there are high scattered trees where the bird can perch. It’s an all-year-round resident in Florida and can be seen across the state.

This bird has a vivid blue above and rusty below, although birds look grayish from a distance. Female birds are grayish with bluish wings.

The Eastern Bluebird doesn’t come to backyard feeders unless you offer mealworms. However, if you set up a nest box, a pair might consider making it their home, especially if your backyard isn’t surrounded by too many houses and trees.

It usually catches insects on the ground, especially caterpillars, crickets, and spiders. In winter, it feeds on fruits and berries.

The Blue Grosbeak visits Florida in the summer, usually nesting north of Lake Okeechobee, but some members will also stay throughout winter. Male birds are deep rich blue with chestnut wing bars, while females are mainly cinnamon brown.

Thanks to the male’s loud singing, you should be able to locate this bird while it’s perching on trees. It might visit your backyard if you have a lot of shrubs and occasionally fill your bird feeder with grains and seeds.

Top Tip: The Blue Grosbeak feeds on grasshoppers, crickets, snails, and seeds. Before feeding an insect to the nestlings, the adult bird removes the head, the wings, and the legs.

The Blue-Winged Teal can be found around Florida’s calm inland water bodies, but it’s quite rare to spot.

The male has a brown speckled body and a blue head with a white crescent behind the bill, and birds usually exist in small groups that usually mix with other species of dabbling ducks.

This bird feeds on aquatic insects, clams, crustaceans, and snails. In winter, it feeds on rice and water lilies.

The female bird decides where to build the nest by hovering over the area, but it might take several days until she picks the appropriate nest site. The nest is usually built at least one foot above the nearest water body and is usually concealed with vegetation.

The Great Blue Heron can be found near the wetlands, marshes, lakes, and around the coastline of Southern Florida, where it arrives in winter. It can usually be seen standing motionless as it scans the area for prey.

This bird looks gray-blue from a distance, although there’s a pure white subspecies that scientists recorded in Southern Florida. Once it spots the prey, the Great Blue Heron thrusts its bill to stab it.

It’s highly unlikely that a Great Blue Heron will visit your backyard unless you have a fish pond. However, you can always set up a nest platform if you live near its habitat.

It feeds on fish, amphibians, reptiles, small mammals, and other birds. It swallows the prey immediately if it’s small and stabs it with its bill if it’s large, often shaking fish to loosen their spines before swallowing them,

The Blue-Headed Vireo is a moss-green bird with a bluish-gray head. It’s a summer bird in Florida and can usually be seen foraging in the canopy of mature forests, moving slowly from one branch to another as it looks for insects.

Author Note: You can notice this bird if you pay attention to its singing pattern, which can easily be confused with the singing of other vireos. It rarely visits backyard feeders but might come and visit your backyard if there are hedgerows.

The Blue-Gray Gnatcatcher is a tiny songbird with a blue-gray overall and white below. It’s quite common in all 67 counties of Florida all year long, but it’s more likely to be seen in the north during summer and in the south during winter.

This bird usually flies pretty fast as it chases insects. It usually moves its tail from side to another, scaring insects and flying to catch them.

A single pair can build up to seven nests per season, often using material from previous nests. The Blue-Gray Gnatcatcher feeds on insects, spiders, and other invertebrates. If the prey is large, the bird will take the wings off and beat it before eating it.

The Black-Throated Blue Warbler can be spotted in Florida during the spring and fall migration seasons. It’s a small bird with a midnight blue above, white below, and a black patch on the throat and face.

This bird doesn’t spend much time at treetops. Instead, it forages for insects in the lower canopy, usually catching insects from the undersides of leaves.

Top Tip: Unlike other warblers that molt in fall, the Black-Throated Blue Warblers keep their bright plumage all year long.

The Black-Throated Blue Warbler searches twigs and leaves for caterpillars, flies, and spiders. It also sometimes supplements its diet with fruits, especially in winter.

Although blue birds aren’t that common, there are several species of blue birds that you can spot in Florida. We hope you enjoyed our guide on blue birds in Florida.

Some of them don’t look blue from a distance, but others will dazzle you with their amazingly outstanding plumage. Keep a pair of binoculars nearby, and you might see a few.

Prev
Can Birds Pick Up Their Babies? Everything You Need to Know 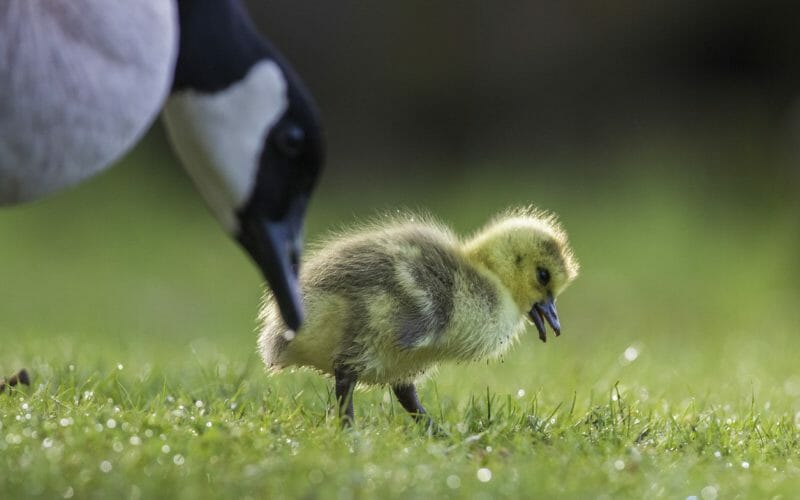 Next
Birds with Yellow Eyes: A Comprehensive Guide to 10 Yellow-Eyed Birds 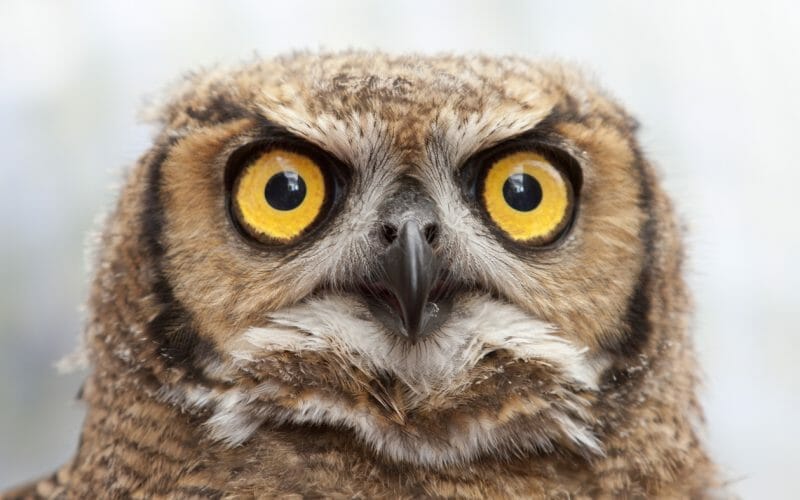 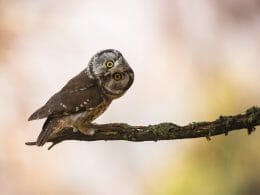 Owls in New Jersey: 10 Common Owls with Pictures for You to Identify 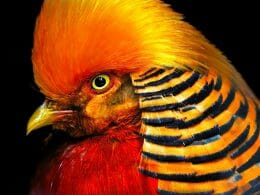 For us humans, mohawks are a fashion statement 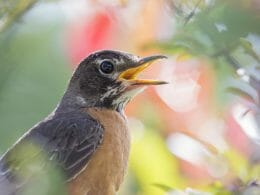 From the beautiful landscapes to the rich history, there’s a lot of reasons to 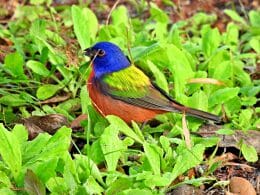