When you’re walking in the middle of strong winds, your first instinct is to turn your head to the left or right, tighten your coat around your body, and squint your eyes to prevent any dust from coming in. Birds, too, must have instincts that protect them against harsh weather conditions, or else they won’t be able to survive. So, how do birds fly in strong winds?

Well, birds adjust the angle of their bodies, so it’s not held back by the wind. They keep their eyes on their targeted destination while trying to maintain a forward motion to reach there.

Let’s see how else they manage to fly in harsh winds.

How Do Birds Fly in Strong Winds?

Scientists have always been perplexed by the birds’ ability to fly in harsh winds and maintain their speed. Well, it’s hard to imagine that a bird can balance its body against wind effortlessly when stabilizing a full-fledged aircraft with a full crew of professionals proves to be a hard task.

Developing features that allow the aircraft to travel safely has taken a lot out of scientists, but birds seem to be able to do that naturally.

If you’re curious to know how birds fly, they use their wings as a suspension system, allowing them to cope with harsh fluctuations of the wind. They angle their bodies towards the direction of the wind, keeping their heads and torsos stable.

They use aerodynamics to their advantage, keeping their bodies stable using the power of their winds. Some birds, like owls, have more power in their wings than we have in our arms. So, when they flatten them out against the wind, they absorb the gust and allow the bird to fly safely while maintaining its high speed.

Additionally, wings have sweet spots—most forces from the wind act near these spots, reducing the impact on the bodies. Birds also use wing morphing to change the posture and the direction of their wings for better withstanding wind.

Author Note: The best thing about these actions is that the birds don’t do anything extra. They have built-in mechanics that help them fight off the wind, and that’s awe-worthy.

How Don’t Birds Fall While Flying?

Using aerodynamics to fly safely in the middle of a strong wind is great, but wouldn’t that cause the birds to fall, with gravity and all?

Well, there are a couple of things you’re forgetting. Some objects, like helium balloons, managed to defy gravity and go up instead of down. While birds don’t do that, they have some built-in advantages that prevent the wind from pulling them down.

These advantages include feathers and hollow bones. These two account for lightweight, so birds are easily able to stay up even in strong winds.

On top of that, birds eat food that’s too small and lightweight, yet it’s high in nutritional value. That includes seeds, insects, and fruits. So, they don’t weigh their bodies down while still getting the needed energy.

How Do Birds’ Wings Help Them Fly in Strong Winds?

If wings are the reason birds don’t fall while flying in strong wind, then why don’t bats and insects do the same? They have wings too, but we don’t see them strolling in the air casually in the middle of a storm. So, why are birds’ wings more adaptable to flight than any other wings?

The reason is simple. The breastbone of birds, otherwise called the sternum, has a shape close to that of a vessel’s keel. It attaches the wings’ muscles to the breast, accounting for more power and better withstanding of wind.

Plus, the bones in a bird’s wing are smaller than you think. The structure is all muscles and feathers, which are pretty good at standing against harsh conditions.

There’s also one magical act the birds do that’s called preening. Preening is when the birds take care of their feathers, covering them with oil from the Uropygial gland and interlocking them, so they don’t fluff out when it’s time to fly.

How Are Bird’s Bodies Designed to Help Them Fly?

Aside from their wings, birds’ bodies are well-adapted to flight for many reasons. They have their center of gravity between their heads and tails, which is also right between their two wings. That way, when they put most of their weight in the center, their bodies stay put while they’re flying without tipping in any direction.

Birds also have no noses or teeth, which could serve as extra weight and tip them forward during flight. Instead, they have nostrils on top of their beaks that they breathe through. They also use them for smelling. As for grinding their food, they have a gizzard near their stomach for that.

Moreover, birds don’t fill their lungs with air as we do, and their lungs aren’t that heavy. They’re flat, and they sit against the back ribs. When they breathe in, the air goes into the air sacs in their lower abdomen. They’re placed behind the center of gravity. Then, when the birds breathe out, the air takes different passages to get back to the lungs.

How Do Birds Stay in the Air When There’s Strong Wind?

Birds have multiple ways of staying in the air when there’s a strong wind and even when there isn’t any wind. The two main methods are flapping and soaring. Let’s see how they do both.

When birds flap their wings, their tips move downward and forward, creating a loop at the downstroke’s bottom. As the wing moves up again, the tip moves upward and backward.

Author Note: During the downstroke, the pressure gets higher below the wings, causing them to lift. As the birds move forward, the air rushes through, lifting their wings even more in a flapping motion.

However, not all birds are capable of flapping. Birds with larger wings go soaring, which we’ll talk about in detail below.

Flapping birds need to stay moving forward at high speed, so the pressure stays put without fluctuating. Songbirds’ speed must be at least 11 miles per hour to keep them up.

When birds soar, they make use of three things: thermal air currents, wind, and updrafts. In all cases, they take advantage of the air to keep them up. Here’s an overview of each of them.

When there’s an area of cold air right next to an area with warmer air, thermal air currents develop. Imagine a paved road right next to a snowy field; the air will be warmer near the road, even if for only a few degrees.

Warm air is lighter than colder one, so it rises high, lifting lightweight objects along with it. Since birds are mainly made up of hollow bones and feathers, they lift with the warm air.

Thermal air currents usually help birds that have wide wings and tails, such as hawks.

When birds have their wings spread, any wind coming their way will keep them up—mainly thanks to how their wings are shaped, like airfoils. Birds use that to their advantage by spreading their wings and staying stable, letting the wind lift their bodies.

You probably saw one or two gulls floating over the sea before. You’ll find their wings spread out without flapping, and they’ll be changing their bodies’ directions constantly.

Birds that depend on wind for lifting them mostly have narrow wings, such as albatrosses and seagulls, which are both sea birds.

When strong wind hits an obstruction, an obstruction current develops, otherwise called an updraft. Things that the wind hit may include a mountain, a cliff, or a building. The air that rushes from the process must find a direction, so it chooses to go up. If there’s a bird around, the wind will carry it up as well.

A lot of birds fly on updrafts, choosing to stay close to land obstructions when there are strong winds. Those include hawks and any birds that have wide wings and tails.

How Do Birds Come Down From Flight Safely?

Now that we covered how birds stay up in the air during strong winds, let’s see how they come down from flights safely, even when they’re flying at high speed.

Author Note: Birds that move at exceptionally high speeds, like robins, will change the angle of their wings to land safely. They’ll raise their wings high, increasing drag and slowing their forward movement. The lift then decreases, and they start moving downward.

Other birds, like cranes, will need more time to land safely because of their large bodies, so they stretch their feet, as well, to increase drag and slow their speed. Their legs act as brakes, then.

Birds are exceptional creatures; they’re different from any animals we know of. All animals have some impressive instincts and tactics that protect them against harsh weather conditions, but birds are the most awe-worthy.

Their bodies are well-designed for flight, and their feathers are fluffy to endure the low temperatures. We don’t need to worry about the fluffy fellows anymore! We hope you enjoyed this article on how do birds fly in strong winds.

Prev
Can Birds Fly Straight Up From the Ground? 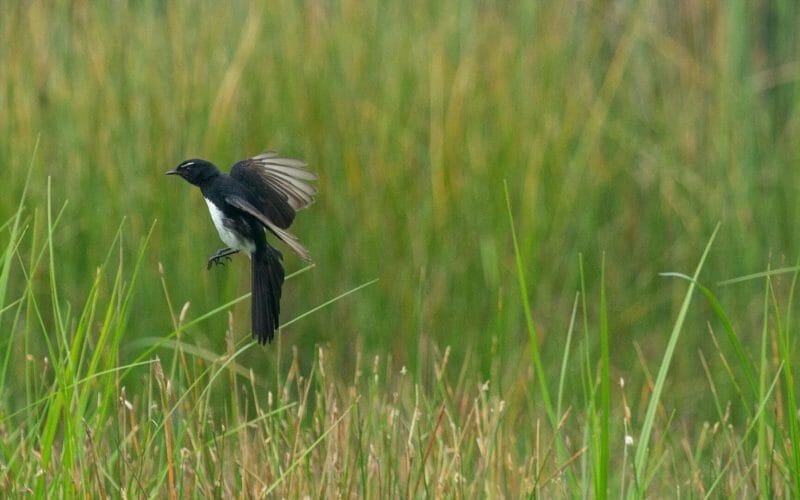 Next
How High Can a Bird Fly Before It Dies? 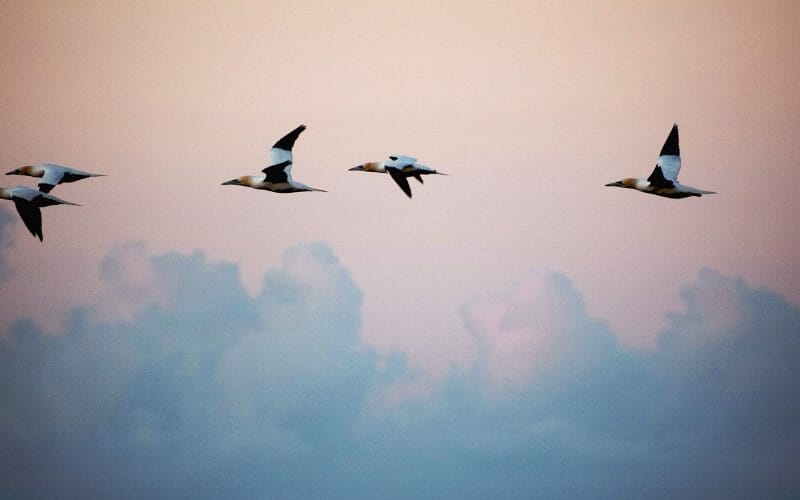 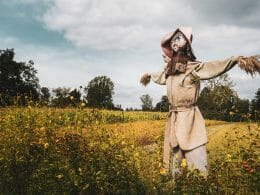 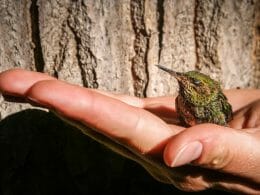 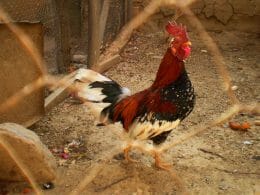 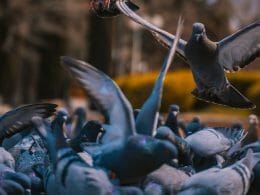