I remember the first time I saw a Scrub Jay. I have to admit, I fell in love with its cute blue plumage, floppy tail, and hunched-over posture. But that attractive facade was quickly torn down when it sounded the ugliest screeches I’ve ever heard. Unfortunately, their horrible calls aren’t their only annoying feature. Scrub Jays are notorious for being aggressive toward other birds. They can even harass your cat or dog if they seem too intimidating. But do you know how to get rid of Scrub Jays?

I’m here to share my experience on how to get rid of scrub jays for good. I’ll introduce a bunch of techniques that can drive them away, but I’ll also suggest ideas that can make them more peaceful.

Contents hide
Things You Should Know About Scrub Jays
They’re Freakishly Smart
They Have a Solid Memory
They Have a Tight Social Structure
How to Get Rid of Scrub Jays
Cover Your Windows
Use a Raptor Decoy
Or Play Raptor Sounds
If Nothing Works, Do NOT Hurt Them
How to Live Peacefully With Scrub Jays
Install Selective Bird Feeders
Serve Food That Scrub Jays Hate
Dedicate a Feeder for Scrub Jays
Final Words

Things You Should Know About Scrub Jays

There’s a famous saying that goes like, “Know thy enemy and know yourself. In a hundred battles, you will never be defeated.”

You probably know that Scrub Jays aren’t like any other birds. If you really want to have the upper hand, you should learn some basic facts about them. But don’t worry, we won’t dive too deep into technical stuff.

Scientists have always been interested in testing animals’ intelligence. Several studies have proven that chimpanzees (and other primates) have sophisticated brains capable of doing basic problem-solving.

But as it turns out, the brain-to-body ratio of Western scrub-jays exceeds that of chimpanzees, trailing behind humans with a relatively small margin!

Author Note: A 2014 study tried to test their cognitive ability by a classic shell game. There were two researchers trying to stash a worm in a set of four cups. While the first researcher had all four cups open, the second covered three of them.

If the scrub jays are smart enough, they must give their full attention to the first researcher to know where he’ll hide the worm. There’s no point in wasting time with the second researcher since he had only one open cup. Surprisingly, that’s exactly what they did!

They Have a Solid Memory

Scrub Jays are among the few species that can plan for the future. They can collect up to 11,000 edible items throughout the year, guaranteeing an ever-lasting food source. But unlike any other birds, Scrub Jays choose their hideouts pretty wisely. They can even dig in the ground, bury the food, and then cover the area with a leaf!

The amazing fact here is that they can remember what they hid in each store.

To prove this, a group of researchers gave peanuts and dog kibble for Scrub Jays to stash. On a later day, they divided the birds into two groups: one ate peanuts, and the other devoured kibble. `

The birds weren’t fed the next day, which forced them to go retrieve their stashes. Surprisingly, those who ate kibble went for their peanut stores, and those who ate peanuts dug their kibble stores. The experiment was held more than once, yielding the same results each time.

They Have a Tight Social Structure

Florida Scrub Jays often live in large groups. As some members search for food, others will keep watch for predators. If one bird spots a looming danger, it’ll sound a specific call to warn the others. Some calls may invite birds to mob the predator, while others will encourage fleeing.

How to Get Rid of Scrub Jays

Alright, now that we’ve garrisoned ourselves with a bit of knowledge, we can start discussing strategies to fend off these bully birds away from your backyard.

If you enjoy having the Scrub Jays around, yet you want to make them less aggressive toward other birds, skip to the following section.

If you wake up every day to the sound of Scrub Jays pecking at your window, you can try covering it with an opaque window cling.

Why would this work? Well, Scrub Jays might be pecking at their reflection on your windows, thinking that they’re protecting their territory against another bird.

Author Note: That instinct intensifies in the spring as Jays search around for a chance to mate. So covering your window will be an excellent way to tell them you’re not posing any threat.

Use a Raptor Decoy

Most Scrub Jays aren’t afraid of humans because they realize you’re not capable of doing much harm. You might shoo them with your hand or poke their nest with a stick — that’s just about it!

But you know what can scare the bejesus out of them? Raptors! (aka birds of prey)

If you can locate the Scrub Jay’s nest, place a fake raptor statue right next to it. You can try hawks, eagles, falcons, or even vultures.

If you want the best results, I recommend choosing owls. Most of these decoys feature a rotating head, which makes them seem like actual predators. Best of all, the head movement is triggered by the wind rather than a motor, making it seem even more life-like.

Although using a raptor decoy proves useful, it‘ll inevitably scare away other birds, which can be bad news if you enjoy listening to the cute chirps of songbirds.

In that case, you may want to order the ”BLUEJAY be GONE” CD. This CD will sound a screech of a predator, followed by several calls of Jays in distress. The Scrub Jays nesting nearby will flee in response to that warning, thinking that a real predator is chasing them down.

The best thing about this idea is that it won’t scare off other birds. It can only freak out Blue Jays, Steller’s Jays, Florida Scrub Jays, California Scrub Jays, and Eastern Bluebirds.

For this idea to work, you shouldn’t place the speakers right next to the Scrub Jays’ nest because they might come to realize that it’s fake if they see the speakers. Hide the CD player underneath some leaves inside a lush tree, preferably one that lies on the other side of your home.

If Nothing Works, Do NOT Hurt Them

I know how annoying Scrub Jays can be. Not only do they attack other birds, but they can also harass house pets, even if they are peaceful.

Nonetheless, killing the birds or destroying their nests should never be the answer. It’s actually prohibited by the Migratory Bird Treaty Act of 1918. Breaking this law may subject you to a $500 fine or six-month imprisonment.

But let’s not lose hope yet. Check the following section to explore some peaceful ideas to live harmoniously with Scrub Jays.

How to Live Peacefully With Scrub Jays

In this section, I’ll introduce some ideas that can help you tame the aggressive nature of Scrub Jays.

If you often see Scrub Jays stealing the food of other puny songbirds, you should try installing selective feeders.

The Perky-Pet Straight-Sided Tube Feeder is one of my favorites in this category. Since the mesh sides have tiny holes, only the small birds can grab the food, such as sparrows, chickadees, starlings, woodpeckers, etc.

There’s a crucial flaw in this idea, though. As the birds try to peck the food, they’ll inadvertently drop some seeds on the ground. As a result, Scrub Jays will swing by your home every now and then to collect their free trophies.

You could place a small plate beneath the feeder to collect the falling seeds, but you’ll have to empty it more than once per day to keep the Scrub Jays away.

Although Scrub Jays are omnivorous, they don’t like eating some seeds, such as nyjer and safflower seeds.

Coincidentally, most of the birds that enjoy nyjer seeds are small and peaceful. The list includes chickadees, finches, goldfinches, and House Sparrows. You might also spot some large Mourning Doves devouring those seeds, but they don’t bully others like Scrub Jays.

Dedicate a Feeder for Scrub Jays

I know what you’re probably thinking: If you’re trying to get rid of the evil Scrub Jays, why on earth would you feed them?

Well, think of it as a peace offering. If you give them a private feeder, they’ll have enough to eat and stash, so they’ll have no reason to harass other birds.

Author Note: When choosing their feeder, it’s better to get a large one with a wide tray that Scrub Jays can comfortably perch on. You can also get an open platform feeder if you want to attract other large birds together with Scrub Jays.

ScrubJays love acorns more than any other food. They’re even known as planters of acorns because you can often see them hiding acorns in the ground to eat them later. They also like sunflower seeds, peanuts, almonds, cultivated corn, walnuts, and cherries.

Vary the food you serve to them as much as possible because they tend to shift their diet according to their metabolic needs. In the mating season, they may devour insects to benefit from their high protein content.

Remember, Scrub Jays have powerful intellects. If one of the previous ideas did scare them away, don’t get too confident because they might actually find their way around it.

If this happens, I suggest shuffling back and forth through the ideas. Researchers believe that Scrub Jays can remember events for up to 7 days, so implement a new idea every week or so.

With time, these mischievous masterminds will cave in after learning that they’re no match for you. We hope you found our article on how to get rid of Scrub Jays useful and informative.

Prev
How to Attract Goldfinches in Winter: The Complete Guide 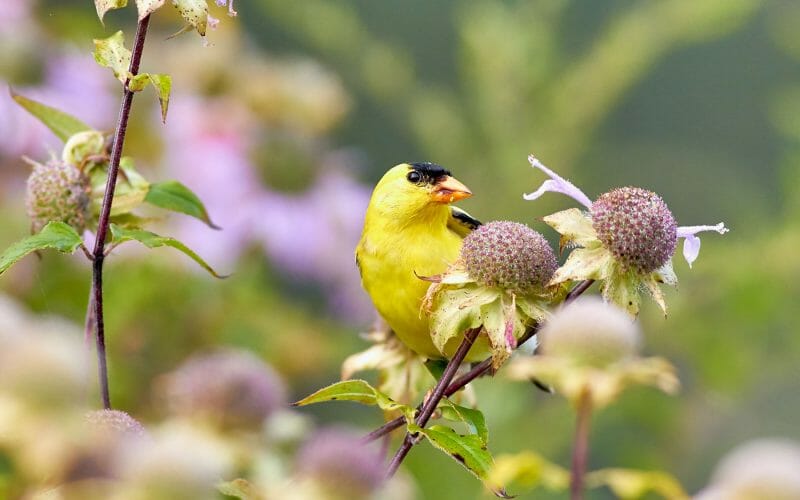 Next
When Is Nesting Season for Hummingbirds? Tiny Friendly Flyers 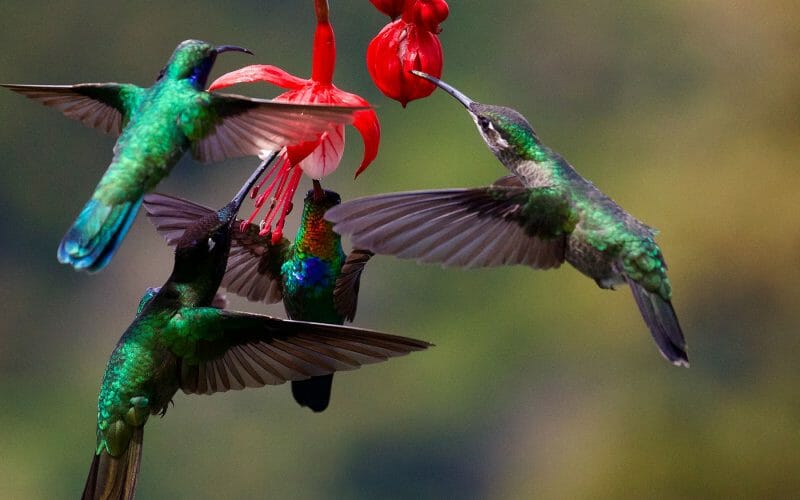 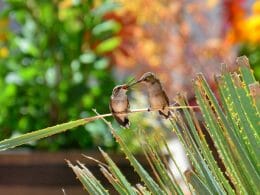 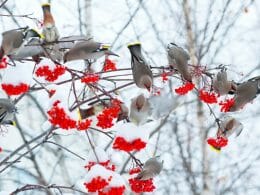 How to Keep Birds Out of Trees? Our definitive guide (Jan. 23)

It’s no secret that trees provide shelter and home to a lot of animals, 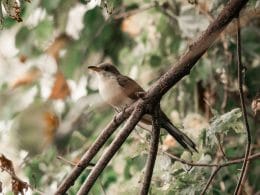 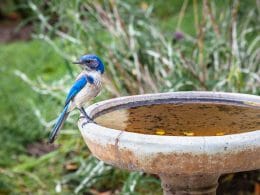 How to Keep a Bird Bath from Freezing: 7 Tips & Tricks