If you’re interested in bird watching, Illinois is a wonderful destination to aim for.

As of March 2020, the IORC (Illinois Ornithological Records Committee) approved an official list of bird species that includes 451 species you can find across the Prairie State.

Out of this extensive range of birds, you can spot 7 species of hummingbirds in Illinois. Today, we’re sharing interesting facts and information about these beauties to help you spot and identify them if you cross paths.

Even if you’re looking to attract more birds to your garden or backyard, it’s a good idea to learn about hummingbirds in Illinois so you can understand the type of flowers and feeders they prefer to visit.

The following are 7 beautiful species of hummingbirds that you can spot across The Prairie State:

The Ruby-throated Hummingbird is regularly seen in Illinois, especially around the summer. This is the only hummingbird species that breeds on the Mississippi River’s east coast.

Author Note: April is when these birds start to make an appearance in the Prairie State, but May is when their numbers reach their peak. The migration journey begins in the fall during September and October, but some Ruby-throated Hummingbirds may stay until early winter.

Ruby-throated Hummingbirds are known to be frequent visitors of feeders and flowers that are shaped like tubes. The males can even get aggressive when it comes to defending their food sources as they tend to chase away other birds from feeders and flowers.

These tiny birds also eat insects, snatching them from the air or spider webs. Ruby-throated Hummingbirds typically inhabit woodlands, grasslands, forest edges, and meadows. You can also spot them in flowering parks, backyards, and gardens.

Ruby-throated Hummingbirds are quite compact with short wings that don’t extend to meet their tails when perched. They’re about as small as a Black-chinned Hummingbird.

The male population of the species possesses a unique reddish-orange patch on their throats, which shimmers in good lighting but appears dark in poor lighting.

Ruby-throated Hummingbirds can fly very fast in a straight line. Impressively, they can stop immediately mid-flight and hover to change directions.

Rufous Hummingbirds are considered the second most frequently spotted species in the eastern United States despite being a western hummingbird species. The first place goes to the Ruby-throated hummingbird.

That said, Rufous Hummingbirds aren’t a very common occurrence in Illinois, but there’ve been multiple reports of sightings over the past years (usually a minimum of one report per year). This species travels the farthest to the north for breeding than any other hummingbird species found in the country.

They migrate in the spring passing across California, then stay in Canada and the Pacific Northwest for the summer. In the fall, they pass by the Rockies on their journey down to Mexico where they spend the winter.

Rufous Hummingbirds like to live in grasslands, yards, open areas, forests, and parks. The best time to see them in The Prairie State is during the winter months around tube feeders.

When it comes to looks, male Rufous Hummingbirds show off a rich copper orange color all over their heads, backs, and bellies. They also sport an iridescent orange throat and a white patch on the chest.

As for the females, they feature a similar copper orange color but only on their flanks. They also have brownish green marks on their backs and whitish undersides.

The diet of a Rufous Hummingbird consists of nectar from bright tubular flowers as well as bugs that they snatch midair or from spider webs. They can get quite aggressive when sharing food sources is in question, where they actively chase away other hummingbirds even if they’re bigger in size.

Anna’s Hummingbirds got their name as a tribute to Anna Massena, the Duchess of Rivoli. This species – unlike many other hummingbird species- don’t migrate. They’re year-round residents of the United States, mainly living in California, Arizona, and a few other western states.

Anna’s Hummingbirds are a somewhat irregular sight in Illinois since they’re an accidental species and all. However, there’s a chance you can spot one during the fall until late winter around Chicago.

Appearance-wise, Anna’s Hummingbirds are stocky birds with medium-sized bodies compared to other hummingbirds. They feature wide tails that reach beyond the wings when perched, short straight beaks, and a plumage consisting of various shades of green and grey with no red or orange feathers.

Top Tip: Males of the species show off patches of bright pink on their throats and heads. These shimmer under direct sunlight but seem brown in poor lighting. Females, on the other hand, possess grey throats with specks of red color.

You can also see them in riverside woods, eucalyptus groves, coastal sage scrub, and savannahs. During the cold months of winter, Anna’s Hummingbirds will turn to bugs, ashes, and sands as a source of nutrition. They’re not a super common species of hummingbird in Illinois

Allen’s Hummingbird is named after the naturalist/bird collector who discovered it,  Charles A. Allen.

Allen’s Hummingbird shares many aspects of its appearance with the Rufous Hummingbird. In both species, the male population shows off vibrant orange throats along with bright coppery plumage. The two hummingbirds may even have green spots on their backs.

That said, adult male Allen’s Hummingbirds are more likely to sport the green patches on the back. So if you want to tell apart the two species by sight, this is your easiest route.

The main habitat of Allen’s Hummingbirds is across the western coast of southern Oregon and California. In Illinois, it’s an accidental species that has been reported multiple times but none of them occurred in the last decade.

Top Tip: Despite the highly restrictive range of Allen’s Hummingbirds, there’s still a chance you could spot one in The Prairie State during the fall and winter.

Compared to other species, Allen’s Hummingbirds are pretty stocky and compact. Their beaks are straight and their tails seem longer than their wings when perched.

When it comes to feeders, these birds have learned to love them. They zip from one to the next just like they do in nature with flowers such as honeysuckle, fuchsia-flowered gooseberry, and bush monkeyflower. They also feed on insects by catching them mid-air or from plants.

Compared to other hummingbirds, the Mexican Violetear is a medium-sized hummingbird. It was previously referred to as the Green Violetear along with the Mountain Violet-ear as the two birds were once considered of the same species.

In Illinois, the Mexican Violetear is such a rare sight that it hasn’t been recorded in the last decade!

These hummingbirds are residents of Central America and Mexico but some may accidentally venture into the United States during their non-breeding season as they travel up north of the continent.

The eastern parts of the country are where most of the sightings have been reported. The most common region to see the Mexican Violetear is eastern Texas but beyond that the chances of spotting one drop drastically.

The Mexican Violetear features a metallic green color all over its body with bluish-purple patches on the breast and the sides of the head. It also has a shiny green throat and underside.

Females look pretty similar to males in this species, but the latter is a bit bigger with more vivid colors.

The Broad-billed Hummingbird is an accidental species in Illinois, but there have been a few reports of their visits to The Prairie State around Peoria, Springfield, and Chicago. Your best shot to see it is during the winter and early spring.

The main habitat of Broad-billed Hummingbirds is central Mexico and along Mexico’s Pacific Coast. New Mexico and Arizona are the only states in the country where this species breeds when the birds migrate north for said purpose.

Broad-billed Hummingbirds are small compared to other hummingbird species. They have compact bodies, long notched tails, and straight beaks. Males have more feathers on their tails with rounded edges, whereas females have squared edges on their tail feathers.

Author Note: Their diet consists of nectar from flowers or feeders, as well as insects that they catch midair or collect from vegetation. The courtship performance of the males is a pendulum-style dance.

Nesting-wise, Broad-billed Hummingbirds prefer mountainous regions at elevations between 6,000 and 7,000 feet. They may even forage at higher locations, up to 9,000 or 10,000 feet.

Last but not least, we’re looking at the Broad-tailed Hummingbird. This is a medium-sized hummingbird compared to other species in North America and it features a big head, a puffy body, and a long straight beak.

The Broad-tailed Hummingbird is one of the most common hummingbird species to spot in the Rocky Mountains region, especially during the summer. Its breeding range extends from Wyoming all the way south to Mexico.

This hummingbird species produces a call that sounds like a bunch of tiny bells ringing. In the United States, the Broad-tailed Hummingbird holds the record for the oldest wild hummingbird thanks to a 12-year old female.

Both males and females have bright shimmering green feathers on their backs and caps, along with a buffy olive color on their undersides and a whitish ring surrounding their eyes. What’s more, you’ll see white tips decorating their tails when flying.

These birds like nesting in high points around evergreen and pine-oak forests, woodlands, and meadows, particularly within a 5,000 to 10,500 feet range.

If you live in the Prairie State and looking to up your chances of meeting these tiny beauties you can try setting up nectar feeders around your yard, providing a water source, and growing native plants.

Additionally, you should avoid using herbicides and pesticides around your plants. It can also help if you provide thin branches without leaves for the hummingbirds to perch.

Prev
Hummingbirds in Georgia: 13 Species to Spot in The Peach State 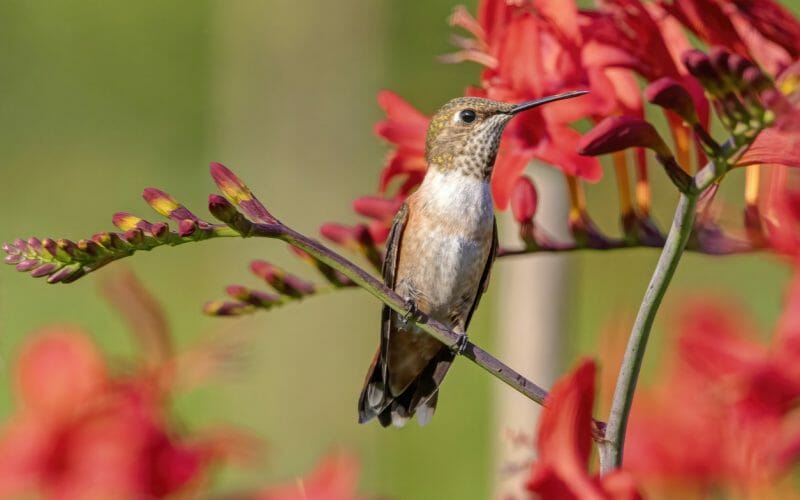 Next
Hummingbirds in Indiana: Top 6 Species with Pictures for You to Identify 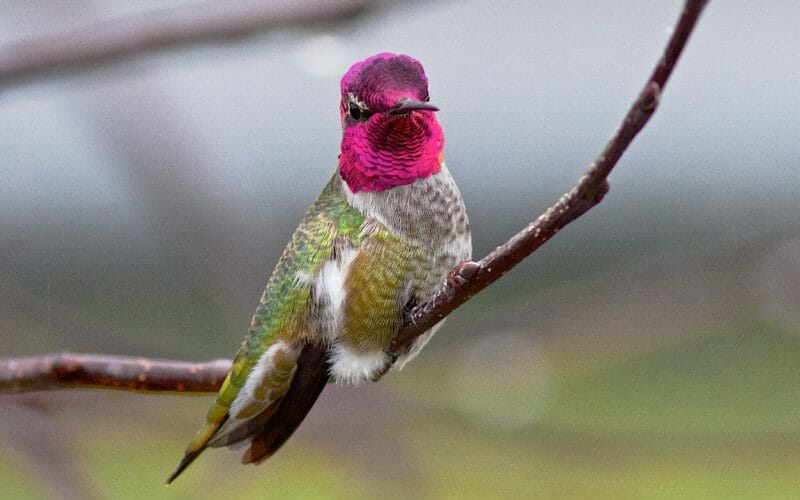 Indiana is a populous Midwestern State with varied geography and landscapes 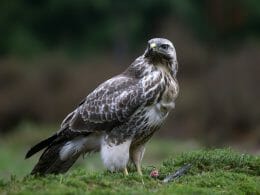 According to the Michigan Bird Records Committee (MBRC), there are 450 bird 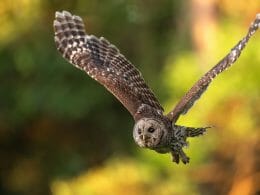 Owls in Pennsylvania: Top 9 Species with Pictures for You to Identify

Pennsylvania is known for many things, most famously its coal industry and 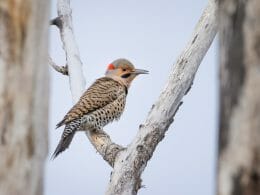