Owls in Indiana: 8 Majestic Owls with Pictures for You to Identify

Although Indiana boasts large industrial cities and wide farmlands, the Hoosier State has a ton of state parks and protected forest areas where native wildlife thrive.

Thanks to its varied topography, there are over 400 native and migrating bird species recorded in the state. Out of the 400+ species of birds living in Indiana, eight of them are owls.

This article discusses all eight owls in Indiana, including when and where to spot them. Let’s dive right in!

Eastern Screech Owls are among Indiana’s loyal year-round residents. They can be seen in forested areas, shady suburbs, city parks, and other areas where trees are abundant.

Author Note: Like Northern Saw-whet Owls, Eastern Screech Owls are diminutive in size. They’re so small that they fit the palm of your hand. They grow up to 10 inches maximum, which is about the size of adult Mockingbirds.

Eastern Screech Owls don’t mind living around humans. If available, they’d take up residence in man-made nest boxes without a second thought. So, if you’d like to attract a mating pair, consider placing a nesting box and a birdbath in your yard. With enough luck, you’ll find a pair using your birdbaths and sleeping in your nesting box!

These palm-sized owls look quite similar to Western Screech Owls, their slightly large owl cousins. They’re stocky, covered in gray feathers, and have no necks. They also have ear tufts that point upwards, making them look like angry Leprechauns.

These owls are named for the small and inconspicuous “ear” tufts situated above their heads. They have flame-colored plumage of white, red, and brown—hence the Latin name flammeus—pale disk-shaped faces, and big, black-rimmed yellow eyes.

Short-eared Owls are what you’d call diurnal owls. They hunt during the day, mostly at dawn and dusk, chasing after prey near the ground.

Unlike most owls, female Short-eared Owls build their nests on the ground. They’d scrape the ground with their claws and line it with grass stems, herb stalks, and animal feathers. Sometimes, they’d pluck the feathers straight from their breast and place them on the nest.

They’d also nest on reclaimed and replanted mines, making them among the few species that have benefited from strip-mining.

In Indiana, Long-eared Owls can be spotted in all regions throughout the state, but only outside their breeding seasons. They mostly appear in the northern and central areas of Indiana, so you’ll have more luck visiting these regions if you’re planning to take pictures of them.

Top Tip: Long-eared Owls have pumpkin-colored facial discs, black and brown patterned feathers, and huge yellow eyes. Their coloring makes them difficult to spot in trees, so they’re mostly heard rather than seen.

They produce an array of sounds—over 200, in fact—including soft, low hoots, high whistles, shrieks, barks, and cat-like meows. A male’s call can be heard a staggering mile away, which is impressive in its own right!

The folklore surrounding Great Horned Owls are better recorded than other species of owl in English literature. They’re among the most iconic predatory birds of all time, up there with Bald Eagles and Peregrine Falcons. They’re mentioned just about anywhere, from children’s books to TV shows.

Great Horned Owls are the largest owl species in Indiana and most of North America. They’re year-round residents of the state, easily recognized by their ear tufts, mottled dark-brown plumage, and intimidating cat-like yellow eyes.

These majestic creatures reside in Indiana’s forests, deserts, swamps, and grasslands. They can also be spotted in urban and suburban areas like parks and cities. If you’re lucky, they might even stop by your backyard in search of food!

Great Horned Owls aren’t picky eaters; they’ll eat anything they can get their hands on. In fact, they’re the only birds that regularly kill and eat skunks.

With that said, the majority of their diet consists of small mammals such as rats, rabbits, squirrels, and opossums. They’d also eat frogs, snakes, and other amphibians. They eat fish, too, but not if they can help it.

In a world where it’s eat or be eaten, Great Horned Owls are one of the most feared predators. They’re the sworn enemies of Red-tailed Hawks because they often bully them into submission and eat their young. They’d also sometimes take over the nest of Bald Eagles and Peregrine Falcons.

Barn Owls are either among the most beautiful creatures you’ve seen or among the scariest. Their “ghostly” appearance makes them a startling yet unforgettable sight—especially in Indiana, with only 43 reported nests statewide.

Top Tip: Unlike other owls, Barn Owls don’t hoot. Instead, their calls consist of eerie screeches or raspy hissing sounds, which contribute to their overall “scary” image.

Since they’re not too fond of winter, Barn Owls are much more common in Southern Indiana. They still appear in Northern Indiana, but most nests are located in the southern half of the state.

Unfortunately, Barn Owls are considered a state-endangered species by Indiana’s DNR Division of Fish & Wildlife, with fewer than 50 nests found in the state. In an effort to reestablish Barn Owls into the country, the DNR has built over 400 nest boxes and placed them in barns and other man-made structures for Barn Owls to breed and roost.

Barn Owls are nocturnal creatures, so they’re only ever seen hunting at night. Their usual prospects include small mammals, such as meadow and prairie voles, deer mice, house mice, and shrews, as well as small birds like starlings and house sparrows.

With a maximum height of 8.5 inches, Northern Saw-whet Owls aren’t only the smallest owls in Indiana, but one of the smallest birds of prey in North America. To put that into perspective, they’re about the size of an adult American Robin!

These tiny owls are found all throughout Indiana during winter. Even so, they’re rarely seen flying about.

As if they weren’t difficult enough to spot with their extra-small size, they’re also extremely reclusive and prefer living in mature forests. In addition, they’ve perfected the art of camouflage, blending into trees like professional hide-and-seek players.

If you’re lucky enough to spot them, you’ll be astonished as to how adorable they are. If it were up to me, I’d place them in the number one spot in the “cutest owl” list!

Despite being named after the sound of a saw sharpening on a whetstone, they only make that sound when threatened. Still, it’s difficult to feel threatened when the creature making the sound owns a pair of oversized, endearing eyes, a fluffy body, and a heart-shaped face.

Northern Saw-whet Owls live in tree cavities that have been left by other animals, usually by Pileated Woodpeckers. They mainly feed on mice and other small mammals. During migration, they’d supplement their diets with insects, songbirds, and, if push comes to shove, other small owls.

Because Northern Saw-whet Owls are so elusive, not much is known about them. In fact, the Indiana Audubon Society has dubbed them as “one of the cutest mysteries of the avian world.”

Barred Owls are one of the lesser-seen owls in Indiana. They’re recognized by their famous, “Who cooks for you?” call, which is often featured in horror movies and Halloween tales. If you hear an owl hooting in a film, it’s likely made by a Barred Owl!

These nocturnal owls are named after their “barred” coloring, which alternates in horizontal stripes of dark brown and light brown. They have round heads with no ear tufts, rounded tails, and ringless black eyes.

Barred Owls are fairly large and stocky, so they’re situated right at the top of the food chain. They don’t have any issues with other predators, except when it comes to Great Horned Owls. If a Great Horned Owl moves in a Barred Owl’s nest, the Barred Owl would (begrudgingly) fly away to avoid fights.

In terms of diet, Barred Owls live for rabbits, squirrels, voles, and small birds. They’d watch their prey from an elevated perch, waiting for the perfect moment to swoop down and capture it with their claws.

Barred Owls are sedentary by nature. They don’t migrate. Even if they’re attacked by Great Horned Owls, they won’t venture further than six miles away from where they originally lived. So, you’d likely encounter the same Barred Owl months later if you visit the area where you’ve first seen it.

Author Note: In Indiana, Snowy Owls are found in the northernmost part of the state. Reportedly, they’re often spotted near the shores of Lake Michigan, as well as open agricultural land and airports.

Although beautiful, Snowy Owls are one of the most aggressive owls in the world. They’re known to dive-bomb humans that step into their territory, accidental or not. They’re also the only known owls that attack arctic wolves.

Take the advice of Brad Bumgardner, executive director for the Indiana Audubon: always keep your distance when observing these wonderful creatures.

This concludes our article on the top 8 owls in Indiana!

Thanks to Indiana’s forest areas, rivers, grassland prairies, and lakeshores, the state is home to an interesting mix of owls.

As you can see, each species has its own distinctive characteristics that make it different from the rest. Some are extremely easy to spot, like Short-Eared Owls, while others need some professional knowledge and luck to find, like Barred Owls and Northern Saw-whet Owls.

Regardless of the species, owls are wonderful creatures that stand out among other bird species.

Prev
Owls in Illinois: Top 8 Species of Owls with Pictures for You to Identify 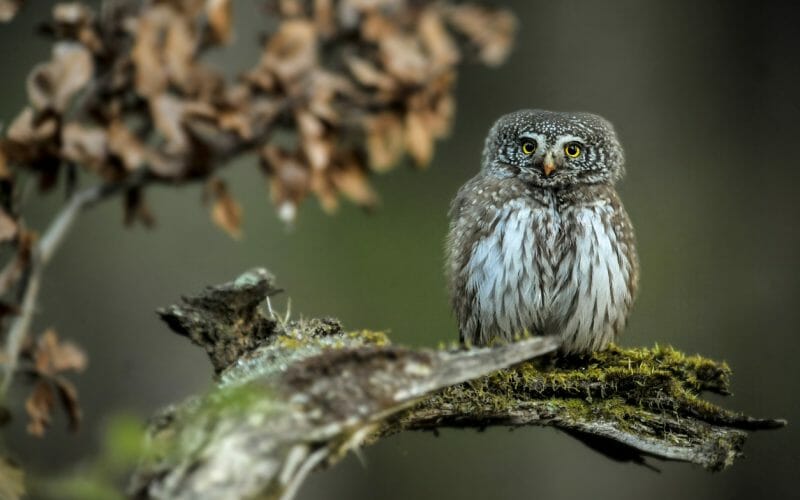 Owls in Illinois: Top 8 Species of Owls with Pictures for You to Identify

Bold, beautiful, and buff; these are three words to describe the owls in

Next
Owls in Iowa: 9 Most Common Owls with Pictures for You to Identify 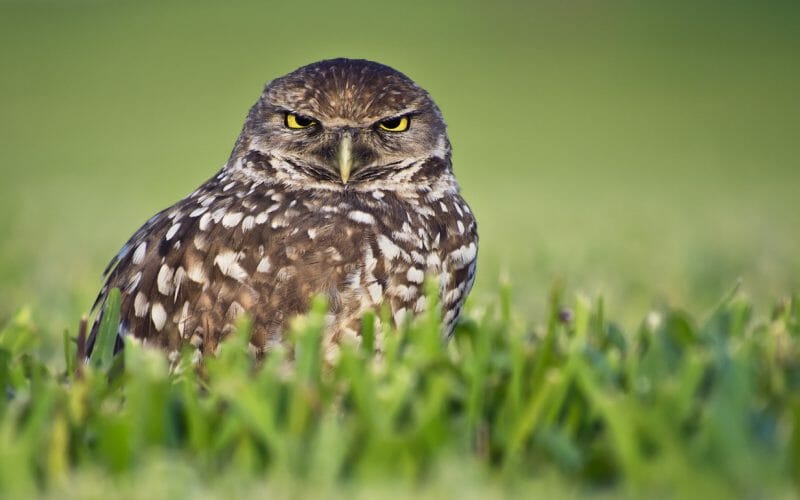 Owls in Iowa: 9 Most Common Owls with Pictures for You to Identify

Iowa has many forests, lakes, rivers, and streams 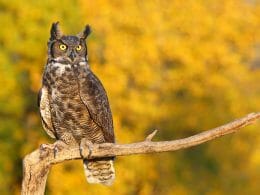 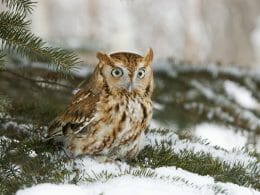 Owls in Connecticut: Top 9 Must-See Owls with Photos for You to Identify

Birdwatching is a quickly-growing hobby across all 50 states, and Connecticut is 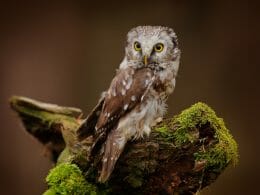 Owls in Kansas: Top 8 Most Common Owls You Can See with Pictures

The name of the State of Kansas comes from the Kanza tribe of the Sioux family, 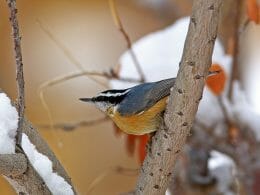 Robins are some of the most famous birds, and the American Robin is probably the