The 13 Most Common Owls in Texas with Photos

With over 630 documented species of birds in Texas, the Lone Star State is perhaps the hottest birding spot in the United States.

Thanks to its unique geographic position and temperature, it’s home to at least 10 species of owls, including the ever-famous Great Horned Owl and the gorgeous Barn Owl.

In this article, we’ll list some of the most beautiful owls in Texas including how to identify them. Let’s dive right in!

Great Horned Owls, also known as Tiger Owls, are the largest owls in Texas and the third-largest owls in the world after Blakiston’s Fish Owls and Eurasian Eagle Owls.

These intimidating birds get their names from the horn-like ear tufts protruding from their heads. They have reddish-brown faces, mottled gray-brown plumage, and broad, barrel-shaped bodies.

Great Horned Owls can be spotted across all regions in Texas. They mostly live in deciduous and evergreen forests, tundra edges, swamps, and deserts, but can also be spotted in parks, cities, and orchards.

Thanks to their large size and unwavering strength, they can take on prey of similar size without much issue. This includes ospreys, falcons, and other owls like Eastern Screeches.

Great Horned Owls won’t hesitate to attack when threatened, regardless of the species. They’d even attack humans if it comes down to it. Therefore, they’re best admired from afar.

Barn Owls are year-round residents of Texas. They’re known to nest throughout the year, but they mostly breed in February through June. When winter comes, they roost in junipers to protect themselves from the wind and cold.

Author Note: These beautiful birds are known to nest in chimneys, haystacks, barn lofts, church steeples, and cliffs. Unlike Great Horned Owls, they don’t mind coexisting with other owl species in areas where sugar cane, rice fields, and marshlands are abundant.

Barn Owls have an incredibly unique appearance. Some call them beautiful while others call them unsightly or even unsettling, especially when encountered at night. They have a pale, “ghostly” appearance with heart-shaped faces, mottled tawny-gray feathers, and big black eyes.

Although fairly large in size, Barn Owls are relatively docile. They rarely show aggression. If a predator approaches them, they’ll fly off instead of causing trouble.

Barred Owls have a wise, venerable look that reminds us of the owl from Winnie the Pooh.

Barred Owls appear across all regions in Texas, but they’re abundant in Eastern Texas. They live in deciduous and evergreen forests, feasting on small reptiles, squirrels, mice, birds, and chipmunks.

Widely recognized for their unique “who cooks for you?” call, Barred Owls are easy to identify. This is because they aren’t fully nocturnal. If you’re lucky, you can find them searching for food in broad daylight.

Like Barn Owls, Barred Owls aren’t aggressive creatures. Instead of defending their territory with screeches and claws during disputes, they’d simply leave and search for a new home elsewhere.

Western Screech-Owls are among the smallest owls in Texas, measuring only about 7 to 10 inches tall. Their territory extends throughout the Trans-Pecos and the western Edwards plateaus, overlapping Eastern Screech Owls from the western Kerr countries.

Due to their excellent camouflage, they’re fairly difficult to detect at low densities. They perfectly blend in with tree bards, allowing them to capture prey more swiftly than most owls.

Like their Eastern cousins, Western Screen Owls have an adorable, “stuffed-toy” look with their round, stocky appearance, big, expressive eyes, and small ear tufts. They come in three color variations, gray, red (rufous), or brown, and have gray streaks on their abdomens.

Since they’re so small, Western Screen Owls feed on small rodents, bugs, and reptiles. Like most owls, they exclusively hunt at night.

Eastern Screech Owls live in woodlands, clearings, suburbs, and even parks. They feast on small critters, mammals, reptiles, and bugs, and would occasionally nab a passing fish as a quick snack. They strictly hunt at night, so you’ll rarely see them during the day.

Burrowing Owls live in Western Texas around the panhandle area. Like Barred Owls, Burrowing Owls are active night and day. They can be spotted in fields, pastures, deserts, meadows, and other open habitats with little to no vegetation.

As the name suggests, Burrowing Owls make their nests in homes of abandoned borrows, most of which belonged to ground squirrels, prairie dogs, and tortoises. Due to this, they have a significantly higher carbon dioxide tolerance than other owls and birds.

Despite their small size, Burrowing Owls won’t hesitate to attack when threatened. They’re not aggressive, but they’re not docile, either. They’re quite protective of their territories and would actively defend their nesting site from predators if needed.

Snowy Owls thrive in cold climates, so they rarely visit Texas. However, they can be spotted in Northern Texas from time to time if you know where to look.

Snowy Owls are renowned for their exotic beauty and mostly-white plumage. Males are almost entirely white, while females are barred with black and brown.

Although they’re quite large, these gorgeous owls aren’t the most vocal. They usually only make noises when threatened or faced with potential danger.

Like Great Horned Owls, Snowy Owls are incredibly defensive of their territories. They’ll attack anyone who threatens their nest regardless of how large or dangerous they are. In fact, Snowy Owls are known to attack arctic wolves that have come too close to their nesting sites.

Dubbed for their diminutive size, Elf Owls are the smallest owls in Texas and across North America. At only five to six inches, they’re no larger than the common sparrow.

Top Tip: Elf Owls live in the Western and South-Western parts of Texas, particularly in dry and arid areas. They live in telephone poles, yucca stalks, and holes made by Ladderback Woodpeckers.

Since they’re so small, they mainly feed on insects, bugs, and small reptiles.

They’re identified through the v-shaped stripe above their eyes, their yellow-pink bellies, and their reddish-brown plumage. Like Barred Owls, they have tuftless heads.

These owls are known for their comically “surprised” appearance. They have large, yellow eyes and long ear tufts that point straight up as if curious or shocked.

Their tufts are also closer together than that of Great Horned Owls, plus they have distinctive orange facial discs. If placed side-by-side, it’s unmistakable which owl is which.

Considered to be one of the most vocal owl species in the world, Long-Eared Owls produce a variety of sounds including hoots, squeals, screeches, whines, meows, and even barks.

Long-eared Owls mostly live in woodland forests, grasslands, and areas with an abundance of tall shrubs. During winter, they seek out pine stands and shelterbelts. They spend their days roosting on trees, their plumage perfectly camouflaging them from potential prey and predators.

Author Note: Short-eared Owls are opportunistic eaters. Although they prefer small mammals, they don’t say no to replies, birds, and insects.

Like Snowy Owls, Short-eared Owls aren’t very vocal. They’d only make noise when threatened or when they want to scare predators away. Their calls resemble that of a small dog or a cat looking for a mate.

Short-eared Owls are diurnal creatures, meaning they hunt night and day. They can be seen flying above fields just as the sun rises, their motions bath or moth-like.

Unlike Long-eared Owls, Short-eared Owls don’t have ear tufts. They have round heads, short necks, light or dark-brown backs, and tawny or sandy bellies.

Like Short-eared Owls, Ferruginous Pygmy-Owls are diurnal. If you have a keen eye, you’ll be able to spot them going about their day in the afternoons.

Since Ferruginous Pygmy-Owls thrive in tropical environments, they mostly live in the southern part of Texas. It’s incredibly rare to find in any other part of the state. So, if you see one outside Southern Texas, you’re extremely lucky!

Ferruginous Pygmy-Owls are quite small at only 6.5 to 7 inches tall. They’re either white and brown or gray and brown in color, their bellies much lighter than their backs. They also have white-streaked crowns and white “eyebrows.”

Named after the flame-like patterning on their feathers, Flammulated Owls visit the western regions of Texas during their migratory period.

These owls are covered in rusty-colored markings that are quite reminiscent of cracked embers. Their distinct gray-and-brown pattern provides a remarkable camouflage against the bark of trees.

Flammulated Owls can be spotted in coniferous forests with large trees. Despite their tiny stature, their hoots are surprisingly loud and low. You’d never think they came from such a small bird!

Northern Saw-whet Owls are among the cutest owls you’ll ever lay your eyes on.

Top Tip: At an average length of 6.5 to 9 inches, these little guys are fairly difficult to spot, not only because they’re rare but also because they perfectly blend in their environment.

Northern Saw-whet Owls aren’t the most common owls in Texas; in fact, they can only be spotted in the Davis and Guadalupe mountains of Trans-Pecos during summer.

Although cute with their adorably oversized heads and heart-shaped face, their warning calls leave much to be desired. They sound like whetstone sharpening a saw, hence the namesake. Luckily, they only make these unusual vocalizations when they’re threatened. Normally, they’d only make a series of soft hoots.

Texas is one of the most bird-diverse states in the US. There are over 10 different owl species in the country, some of which are native residents like Great Horned Owls and Barred Owls.

If you’re planning to visit Texas, keep an eye out for the magnificent creatures mentioned above. You never know, you might catch one in action during one of their hunts!

Prev
Owls in Minnesota: Your In-Depth Guide to the Top 12 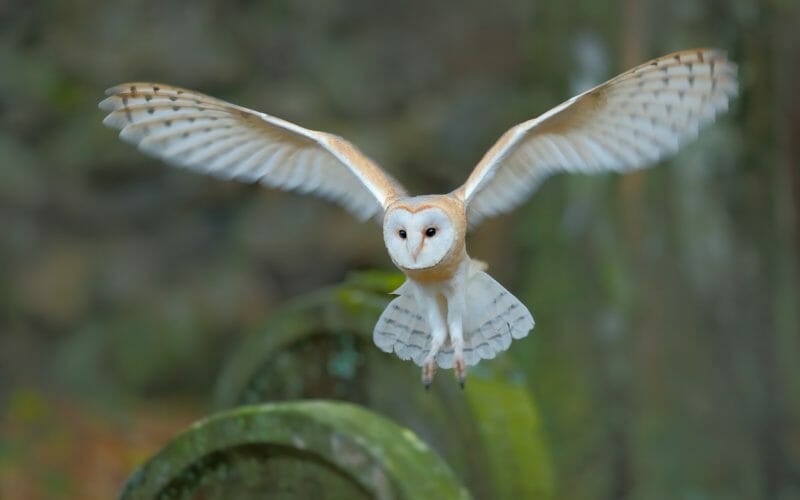 Owls in Minnesota: Your In-Depth Guide to the Top 12

Next
Owls in Georgia: Top 8 Species with Pictures 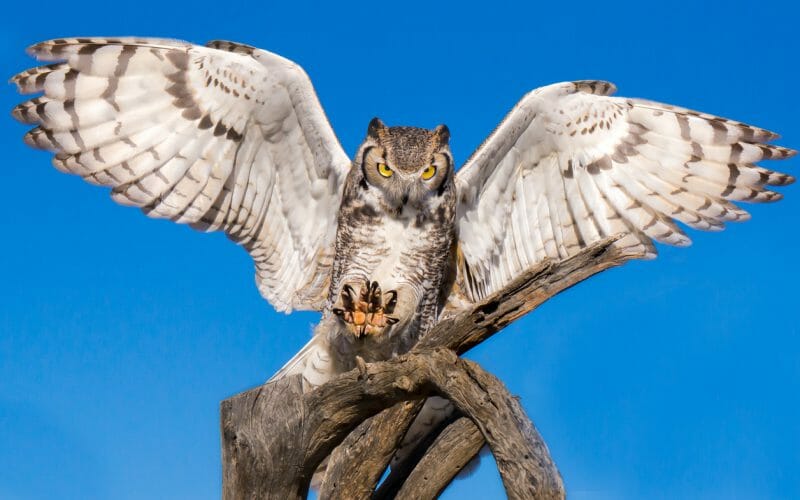 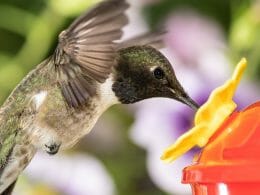 Hummingbirds in Pennsylvania: 6 Most Common Species You Can See

There are over 360 species of the smallest birds in the world, hummingbirds 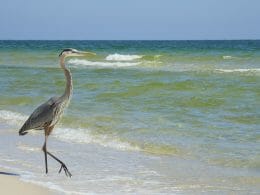 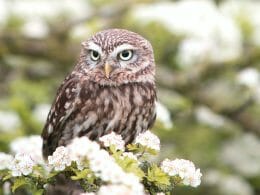 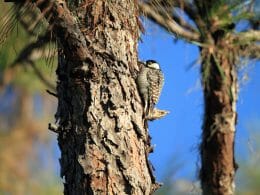