It’s common knowledge that owls are nocturnal, meaning they rest during the day and hunt at night. They stand out more than other bird species because of their unique sleeping habits. If you look for them during the day, you might not find them.

So, where do owls sleep during the day?

Owls tend to sleep in trees in the daytime. They can also rest on rock ledges as well as in deserted locations. These birds will often occupy the nests of other birds and claim them as their own.

In this article, we’ll dive deep into the sleeping habits of owls and where they tend to sleep. Let’s get started!

Where Do Owls Rest During the Day?

During the day, owls sleep in trees. They can also sleep in uninhabited areas and cliff ledges to avoid inconveniences.

Owls will invade the nests of other birds, such as eagles and hawks, and use them as their own. However, owls rarely stay in the nest.

During mating season, they lie close to or around the nest. An owl that has owlets might remain in the nest with her young ones.

The majority of owl species sleep in the same location every night. These birds of prey are keen and ruthless predators, so they don’t need to move around much to avoid danger.

How Do Owls Sleep?

Birds can sleep standing up, lying flat, drifting on a water surface, or upside down. The way they sleep depends on their species.

Owls have a different sleeping routine than other birds, though. Additionally, a young owl sleeps differently than an adult owl.

The legs of an owl have talons that hold them locked to the tree branch they’re resting on. They sleep with their heads facing front, standing on their legs while locking onto a tree branch.

Many people think that owls sleep with their eyes open, but that’s not the case. Owls have three eyelids to safeguard their vision. One for blinking, one for sleeping, and another for maintaining the cleanliness of their eye canals. As a result, even when they close their eyes, they appear to be open.

Author Note: Owls have an excellent field of vision that allows them to see objects with both eyes. This gives the owl a high level of visual sensitivity and intelligence.

Note that owls can’t move their eyes and can only rotate their neck and head 270 degrees.

Young owls sleep a bit differently compared to adults. They have heavy heads, making it difficult for them to rest like adults.

Baby owls sleep lying down on their stomachs, facing sideways. Juvenile owls don’t fall from the branches. This is due to their toes, which help grip tree branches tightly.

Owls are blind as newborns, so they can’t focus on bright lights the way adults can. The noises they hear and the vibrations they sense in the ground affect their sleeping cycles.

When the young birds reach adulthood, they will nap with their heads raised, just like adult owls.

How Much Sleep Do Owls Get?

Owls have different sleeping habits depending on their breed. Generally speaking, though, owls need about 12 hours of sleep every day. During the day, an owl rests, and as night falls, the owl wakes up.

Their immunity and energy are maintained by sleeping for 12 hours each night. Owls must also conserve their energy for later in the day for hunting and other activities.

During the day, owls will take brief naps. They do, however, fall asleep fast—sometimes as fast as 11 seconds.

Even when an owl sleeps, one side of its brain is active while the other is asleep. This way, they can sleep while staying vigilant.

Do Owls Sleep at Night?

Some owl species sleep during the night. Some of those species are Northern Hawk Owls and Northern Pygmy-Owls. They will hunt throughout the day and can sometimes be easily spotted.

A nocturnal owl can hunt during the day, though this is uncommon. This frequently can happen to obtain additional food or to locate scarce food.

The majority of the owl’s prey animals, such as rodents, are also nocturnal. So being nocturnal is advantageous to owls.

Due to the fact that the majority of owls hunt at night, they hunt stealthily and quickly. The birds also have strong night vision and hearing. These abilities allow them to easily detect prey.

Are All Owls Nocturnal?

The idea that all owls are nocturnal is a common misconception. Owls are divided into three groups.

According to research, 69% of owls are nocturnal, 22% are crepuscular, and 3% are diurnal.  Despite these odds, owls are still considered nocturnal birds.

The majority of the owls are nocturnal owls. They prefer to hunt at night and stay active at that time. You can find them napping or roosting on a branch throughout the day.

When something approaches a nocturnal owl in the daytime, it’ll wake up. If there is a threat in the area, the owl will fly away and search for a safer area to sleep in until the night.

Diurnal owls are owls that are awake during the daytime. They sleep and recover their energy at night and hunt throughout the day like other animals.

While hunting, these owls rely only on their vision. Their yellow eyes indicate that they like to hunt when there’s light.

Crepuscular owls are those that are active during the dawn and dusk hours. They can hunt at any given time during the day, though.

The hue of an owl’s eyes reflects when it chooses to hunt. In turn, crepuscular owls have large orange eyes to aid in their hunting in the early morning light.

Where Do Diurnal Owls Sleep?

For a variety of reasons, an owl may be diurnal. The first reason could be to escape hunters that want to eat them at night.

The second reason could be if their habitat permits them to feed during the day. They may have a higher chance of survival if that’s the case.

Author Note: As mentioned before, there are only two types of diurnal owls. These types are Northern Hawk Owls and Northern Pygmy Owls.

Northern Hawk Owls hunt mostly during the day and rest at night. They prefer to sleep in open evergreen forests.

These owls like forest borders, typically close to bodies of water. They also like to sleep in areas of the forests that have been destroyed.

When it comes to nesting, they use woodpecker-made holes in trees. Also, they use naturally degraded cavities and shattered tree stumps.

Northern Pygmy-Owls spread throughout western North America’s mountains. These birds can live in different habitats. You can find them in forest areas along rivers and in elevated spruce forests near tree lines.

These owls move to lower heights during the winter. Also, they may enter cities to hunt birds at bird feeders.

Northern Pygmy-Owls, like other owls, prefer to nest in tree cavities. They frequently exploit old woodpecker holes. They sometimes store their food in tree openings or by tying it to spikes.

Where Do Crepuscular Owls Sleep?

A crepuscular owl is active largely during dusk and dawn. Foxes, wombats, jaguars, and spotted hyenas are some other well-known crepuscular animals.

Here are some crepuscular owls:

Most owls prefer to be in the woodlands. Snowy Owls, on the other hand, avoid forested areas. They prefer to sleep in more exposed regions such as hillsides, mountains, and cliffs.

Snowy Owls will often remain in one position for the majority of the day. They become active near nightfall. They conduct most of their hunting at twilight or soon after dark.

Burrowing Owls prefer open, dry forest areas such as prairies, grasslands, and deserts. Ground burrows are ideal for Burrowing Owls for both nesting and roosting.

Author Note: They frequently rely on the burrows dug by squirrels or prairie dogs instead of having their own. However, Burrowing Owls spend the majority of their time on the ground or on low ledges.

Great Grey Owls are selective over their roosting places. They like a region that has both deep woodlands for roosting and wide fields for hunting. These owls frequently prefer nesting sites, such as green lands, marsh, or fields.

Adults may visit a suitable nest location for two or more weeks before deciding to make it their home. They frequently return to the same nesting place year after year.

Prev
Birds with Yellow Chests: Top 8 Most Common with Pictures 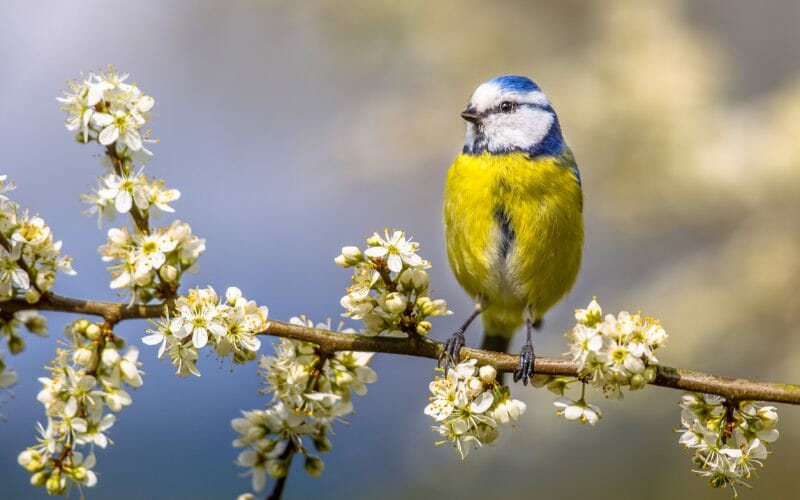 Next
Birds that Eat Nuts: Top 13 Most Common with Pictures 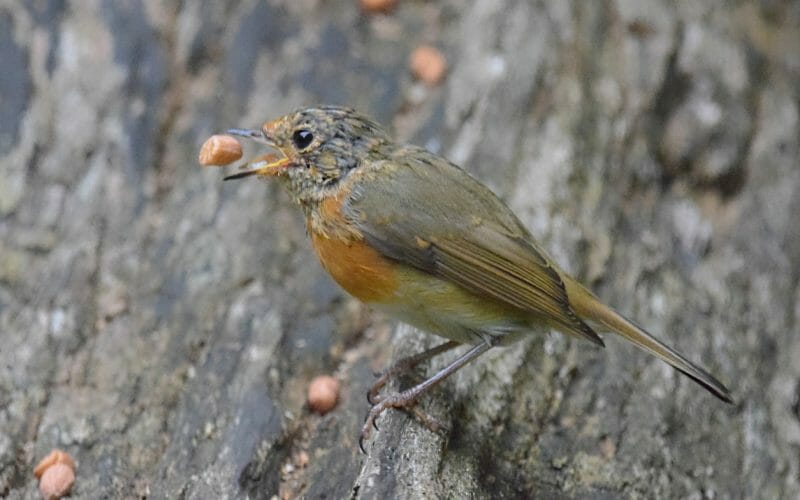 Birds that Eat Nuts: Top 13 Most Common with Pictures 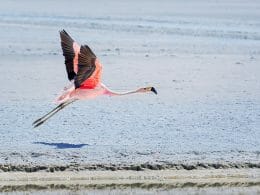 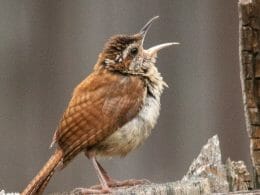 Why Do Birds Sing in the Evening? Read This First!

Why do birds sing at sunset? 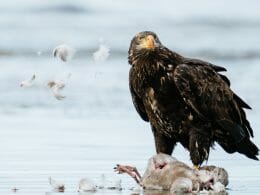 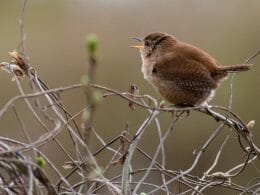