From the beautiful landscapes to the rich history, there’s a lot of reasons to love Kentucky. After all, it was the original home of KFC.

If you’re a bird lover, you can add one more reason to the list!

Kentucky offers you 350+ types of birds, all flaunting different appearances, sizes, and housing preferences. Some of these birds come at a specific time of the year, whereas others are there all year long. Even if you’re not an avid birdwatcher, you’ll develop an appreciation for them.

In this article, we’ll discuss some of the most common backyard birds of Kentucky as well as all of the factors that make every bird on this list quite unique.

The 11 Most Common Backyard Birds of Kentucky

Named after the haunting calls they make, Mourning Doves are medium-sized, buffy, round birds with long tails.

The male Mourning Dove is gray and brown, with a few black spots on the wing and a faint splash of pink on its breast. The female Dove has a similar appearance, but with more muted colors.

You’ll find Mourning Doves in any kind of open space, such as farms, grasslands, and open woods. You can even find some of them on roadsides and suburban areas.

Mourning Doves mostly eat seeds, but they occasionally eat berries and snails as well. If you want to attract them, all you have to do is scatter some millet or black oil sunflower seeds in your backyard.

The female Northern Cardinal tends to be a bit duller in color, with pale brown feathers and red splashes on its wings and crest. Just like the male, the female Cardinal also has a red beak and tail.

You can find Northern Cardinals in different types of environments, most commonly the edges of woods, suburban gardens, and brushy areas.

Northern Cardinals feed on insects, such as ants and beetles, as well as spiders. But they also eat grapes, blackberries, and raspberries.

With an orange chest, gray back, and dark head, you can easily identify the American Robin through its colors. Yes, as you’ve probably guessed, the female tends to be a bit duller in color.

Top Tip: You can find the American Robin in different parts of North America, from woodlands and parks to open fields and forests.

American Robins eat different types of food depending on the season. In spring, they eat insects, earthworms, and invertebrates.

Since insects aren’t that available in the winter, they eat any type of fruit left on trees from the summer, especially berries.

As the name suggests, the Blue Jay has a blue back, wings, and tail, with a white to light-gray chest. Unlike all the previous birds on this list, the male and female Blue Jays look exactly the same.

Blue Jays are around 9-12 inches long and weigh 2.5-3 oz with a wingspan of 13-17 inches. The male tends to be slightly bigger and taller than the female, but don’t depend on size alone to identify their sex.

If you want to identify male and female Blue Jays, you need to observe their nesting and courtship behavior.

In spring, when male Blue Jays want to mate, a bunch of them will surround one female and compete with their calls to gain her attention. When the female takes off, they’ll follow her. So, the one who watches the males and then takes off first is the female.

Also, when Blue Jays build their nest, you’ll see that it’s the female that sits on the eggs. During that time, the male Blue Jay provides food for her and the chicks when they hatch.

Blue Jays like to live in different types of wooded areas, whether it’s forests, oak trees, or pine woods. You can also find them in suburban gardens, as long as they have enough trees.

Since they have strong beaks, Blue Jays eat a lot of nuts, especially acorns. But they also eat different types of insects, fruits, and seeds. While it’s not very common, Blue Jays can raid the nests of other birds and eat their eggs.

Out of all the birds on this list, American Goldfinches are probably the closest you’ll get to Pikachu.

The male Goldfinch has vivid yellow feathers and black wings with white streaks. It also has a black tail with a white spot underneath and a black spot on its head.

The female American Goldfinch is duller in color with no black spot on its head. Note that, in winter, Goldfinches shed their feathers, changing their color to brown. So don’t always rely on the yellow feathers to identify them.

American Goldfinches like to live in any semi-open space that has thistles and weeds. They’re also found on roadsides, in orchards, and at feeders.

American Goldfinches mostly feed on seeds, such as thistles, alder, sunflower, and more. They also eat insects, but only occasionally.

Named after their melodious sounds, both male and female Song Sparrows have white chests and flanks with brown and black streaks and a gray spot around their eyes. But, the vividness of these colors and streaks might vary across the continent.

Both male and female Sparrows are about 4.3-7.1 inches long and weigh 0.4-1.9 oz with a wingspan of 7.1-10 inches. The males tend to be a bit heavier, but there are more practical ways to identify their sex.

Top Tip: As with Blue Jays, you should observe the courtship behavior of Song Sparrows to identify which is male and which is female.

Once a male Song Sparrow establishes its territory, it continues to sing for a while. The purpose of the singing is to call for potential mates and keep any threats away.

If the female Sparrow thinks the male would be a suitable partner, she lands in his territory and stays there. At first, the male might try to kick out, but eventually, they will mate.

You can find Song Sparrows near water, the edges of ponds, and streamsides. They’re also found in any kind of open space, such as brushy fields and thickets. You can even stack your feeders with the right food, and you might just get one or two in your backyard.

In the summer, Song Sparrows mainly eat insects, whether it’s ants, beetles, or caterpillars. In winter, they eat a lot of seeds and fruits.

Carolina Chickadees have black capes and white cheeks. Their backs and wings are light gray and their chests are light brown. There aren’t any distinct differences between the males and the females.

Caroline Chickadees are about 3.9-4.7 inches in length and weigh 0.3-0.4 oz with a wingspan of 6-8 inches. The females are a bit smaller than the males, surprise!

To identify the males from the females, you can watch their nesting routine. While both the male and the female take part in building the cavity, only the female builds the nest.

You’ll also notice that, as the female Chickadee is sitting on the eggs to keep them warm, it becomes the male’s role to bring her food.

Caroline Chickadees mainly exist in urban and suburban fields. You can also find them in deciduous areas, swamps, and open parks.

Caroline Chickadees eat spiders and insects most of the year. But, in winter, they eat fruit and seeds along with insects.

Tufted Titmice have gray crests, backs, and wings with a black spot around the eyes. But their bellies are white with a little splash of peach near the flanks.

For the most part, you won’t be able to tell the difference between a male and female Titmouse based on appearances alone.

You’ll notice that males tend to be more aggressive and dominant than females. As with Carolina Chickadees, the male Titmouse brings the female food while she’s sitting on the eggs.

You can find Tufted Titmice in forests with tall trees, parks, and suburbs. You can also see some of them in your backyard if you have bird feeders.

In the summer, Tufted Titmice eat insects, such as caterpillars, wasps, as well as seeds. In the winter, they eat a lot of nuts, seeds, and fruit.

With a black head, back, and tail, combined with a white belly and brown sides, you’ll see that the Eastern Towhee’s colors pack quite the punch. The female Towhee looks exactly like the male, except that it has brown feathers instead of black.

Typically, you can find Eastern Towhees in any area that can provide them with enough cover, whether it’s forest edges, thickets, or brushy areas.

You’ll see that it’s easy to identify the male and female House Finch because they look completely different from each other.

The male has a cheerful rosy face and upper chest, but the back, tail, and belly have brown streaks. The female, on the other hand, has gray and brown feathers with brown streaks on the back, breast, and belly.

Note that, depending on the food they eat, the feathers of male House Finches might become orange or yellow.

You’ll find House Finches in semi-open areas, whether it’s cities, parks, farms, or forest edges. You can even find some of them around your house if you have feeders in your backyard.

House finches mainly eat seeds, buds, and fruit. They can eat insects, but they don’t do it often. If you have a hopper feeder in your backyard, stock it with black oil sunflower seeds and you might just get some visitors.

The male Eastern Bluebird has a stark blue head, back, wings, and tail, with a rusty brown upper chest and a white belly. The female Bluebird has similar color patterns, but it’s duller; almost gray in color.

You can find Eastern Bluebirds in open areas that are surrounded by trees, including forest edges and open pine woods. You can also find them on roadsides, suburban parks, pastures, and golf courses.

Eastern Bluebirds mostly eat insects, including beetles and crickets, as well as spiders and snails. They also eat different types of fruit and berries.

By now, you’re probably aware of how Kentucky provides its people with a diverse avian crowd. Although some of them share similarities, every bird is unique in its own way.

If you live in Kentucky, chances are you’re going to run into many of the above-mentioned birds in your backyard at least a couple of times.

We hope you enjoyed our guide on the top 11 most common backyard birds of Kentucky. 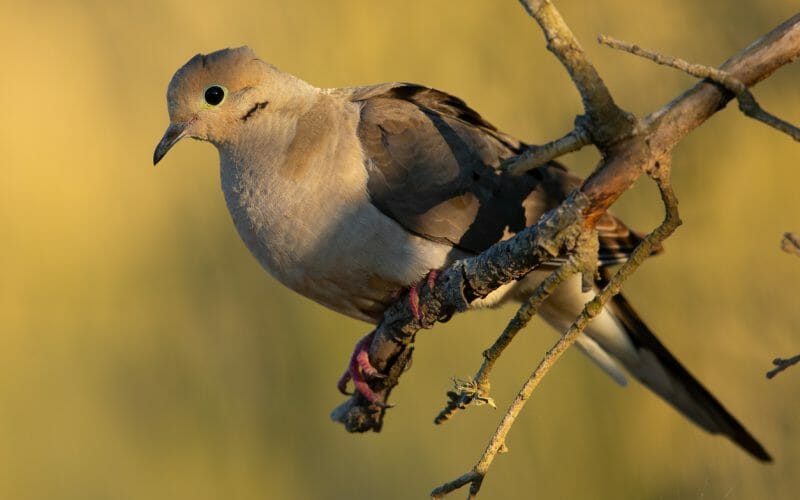 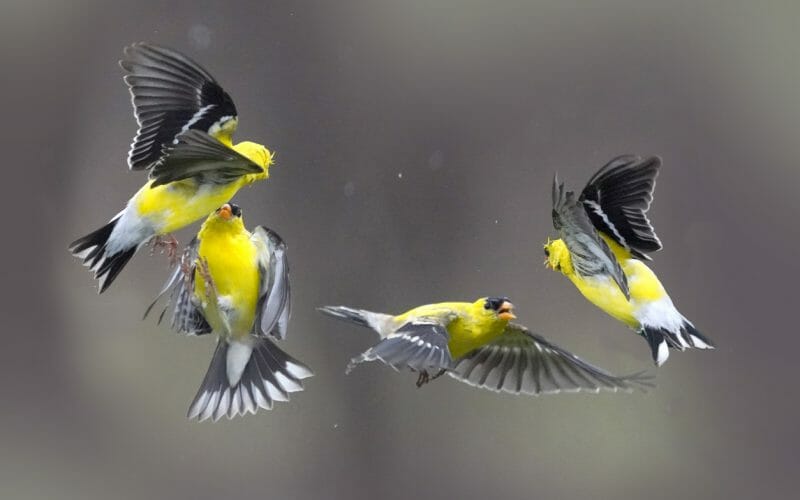 Maine is a beautiful place to live because of its rocky coastline and wonderful, 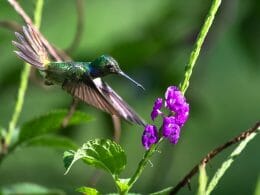 Hummingbirds in North Carolina: Top 11 You Can Spot with Pictures

North Carolina is known for its beautiful beaches and breathtaking mountains 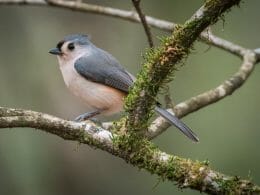 Massachusetts is the 8th most forested state in the US 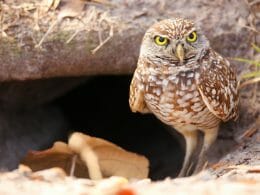 Owls in Southern California: 14 Owls with Pictures for You to Identify

California, nicknamed The Golden State, is famous for its diverse terrain 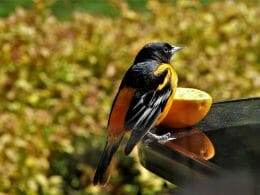