Georgia Birds Of Prey: 14 Most Common Species with Pictures

Georgia is a gorgeous state that features a wide variety of natural terrains, which effectively makes it an attractive home to a broad range of wildlife from coyotes, black bears, and rattlesnakes, to foxes, alligators, and sea turtles.

When it comes to birds, Georgia doesn’t disappoint. It includes 427 species of birds approved and documented by the Checklist and Records Committee of the Georgia Ornithological Society (GOSRC) as of August 2020.

If you live in the Peach State or you’re visiting it, and you’re curious about the types of owls, eagles, hawks, falcons, and other birds of prey you can commonly spot out there, then you’ve come to the right place!

In today’s guide, we’re sharing facts and descriptions of Georgia birds of prey to help you better find and recognize them. Let’s jump in!

Author Note: Most Red-tailed Hawks possess bright brown heads and backs with light-colored undersides and streaked bellies. Adults show off cinnamon-red tails, which is where the name comes from.

Mainly feeding on rodents, you’re likely to spot Red-tailed Hawks flying high in circles over a field. They prefer open spaces and you can commonly see them in the Okefenokee National Wildlife Refuge in Georgia.

Cooper’s Hawks feature the classic appearance of accipiters, featuring wide, rounded wings with a long tail. Their bodies are steely blue-grey on top with dark bars on the tail and wings and reddish-brown streaks on the belly and chest.

Cooper’s Hawks fly in a flap-flap-glide pattern. They inhabit wooded areas and can be commonly spotted in the Kennesaw Mountain National Battlefield, the Piedmont National Wildlife Refuge, and the Altamaha Wildlife Management Area.

Sharp-shinned Hawks are one of the smallest raptors in Georgia. They possess long tails, short, rounded wings, as well as small heads that often don’t extend beyond the wings’ “wrists” while flying.

Adults are blue-grey on top with thin, horizontal reddish-orange streaks on the chest and belly. Sharp-shinned Hawks like to stay at forest edges, but they move to deep forests during the breeding season.

This raptor is smaller than a Red-tailed Hawk but larger than a Broad-winged Hawk. Its plumage is mostly black and white with a copper-red patch on the shoulder and reddish streaks on the underside.

Red-shouldered Hawks show a distinctive “reaching” pose in flight and make a unique kee-rah whistled sound. They inhabit deciduous woodlands close to swamps and rivers. Jekyll Island is an excellent place to spot them in Georgia.

Top Tip: These small-sized raptors possess stocky bodies, large heads, and short, squared tails. Their plumage is reddish-brown on top, barred on the belly, and streaked on the tail.

Typically, Broad-winged Hawks prey on small animals from their perching locations and produce a piercing call on a single pitch. They prefer staying underneath the forest canopy and are easily spotted in Brasstown Bald in Georgia.

Although some people may confuse Ospreys with eagles or hawks, they’re in fact neither. The Osprey is a member of the Pandionidae family and is scientifically referred to as Pandion haliaetus.

Usually, Ospreys like to prey on fish, so they’re sometimes commonly called “sea hawks”, “fish hawks”’, “river hawks”, and so on. However, they may also feed on small mammals, reptiles, amphibians, and crustaceans.

Due to their highly nocturnal nature, your best chance of seeing one would be at night. Don’t worry though, you can easily pinpoint their whereabouts thanks to their iconic hooting calls.

Additionally, the Great Horned Owl has a unique look that makes it hassle-free to identify. This raptor possesses very large ear tufts and a big orange-colored head with black and white rings radiating from its face.

The bodies of these raptors are stocky with rounded heads and tails. They don’t have ear tufts and their eyes are entirely black, providing a striking contrast against their pale faces.

Author Note: Their name refers to the horizontal stripes on their plumage that alternate between shades of brown and white.

One of the most unique aspects of the Barred Owl species is their hooting call, which distinctly sounds like the question: “who cooks for you, who cooks for you all?”. These birds of prey live in mature forests containing both deciduous and evergreen trees.

Short and stocky, Eastern Screech-Owls are either grey or reddish-brown. They possess complex patterns of spots and stripes that provide excellent camouflage against tree bark.

Due to their nocturnal nature, it’s rare to spot these owls. They inhabit second-growth forests at lower elevations, residing in open areas such as swamps and suburban areas.

Most birdwatchers recognize Eastern Screech-Owls by their distinct calls.

These raptors are easily recognizable thanks to their pale heart-shaped face and absence of ear tufts, which earned them a bunch of different names such as “monkey-faced owl” and “church owl”.

Not to mention, they’re also called “ghost owls” owing to their ability to fly in total silence at night. This raptor prefers to stay near old trees and in wooden buildings such as barns, hence the name.

Scientifically referred to as Falco peregrinus, the Peregrine Falcon is one of the fastest animals in the world and -by far- the fastest bird on the planet. The aerodynamic shape of its body allows it to achieve a tremendous speed of up to 200 mph when nosediving.

These raptors mainly prey on pigeons but will sometimes feed on doves, waterfowls, and songbirds as well. They’re blue-grey on top and barred with lighter shades on the underside.

One of the most common vulture species across the United States, the Turkey Vulture is commonly called the “Turkey Buzzard” but scientifically referred to as Cathartes aura.

Turkey Vultures have black bodies and featherless red-colored heads with pinkish beaks. They show a remarkable flight style at low altitudes where their wings spread in a V-shape formation.

Turkey Vultures like to feed on the decaying flesh of dead animals including other birds. They depend on their strong sense of smell to find their meals.

The Bald Eagle, scientifically known as Haliaeetus leucocephalus, has been the national bird of the United States of America since 1782.

This raptor is commonly found in Georgia, but you can also spot it in just about every state of mainland USA as well as Alaska, Canada, and some regions in Northern Mexico.

Bald Eagles aren’t bald in the typical sense; they actually have thick white feathers covering their entire head and face. Instead, their name comes from the old English word “piebald”, which translates into “white patch” in reference to the bird’s bright white head.

Last but not least, we have the American Kestrel. It’s scientifically known as Falco sparverius, but it’s classified as a hawk, not a falcon.

Author Note: The American Kestrel has black spots all over its body with distinct steely blue patches on its wings and forehead.

There you have it,14 of the most common Georgia birds of prey. You can use the descriptions and information we shared today to make finding and recognizing these raptors easier the next time you’re in the Peach State.

All you need to do is stay on the watch! 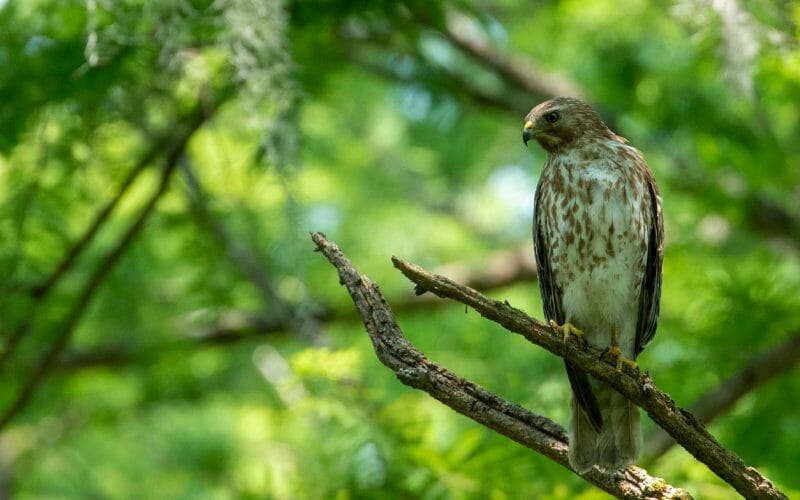 Next
Illinois Birds of Prey: Top 16 Most Common Bird of Prey with Pictures 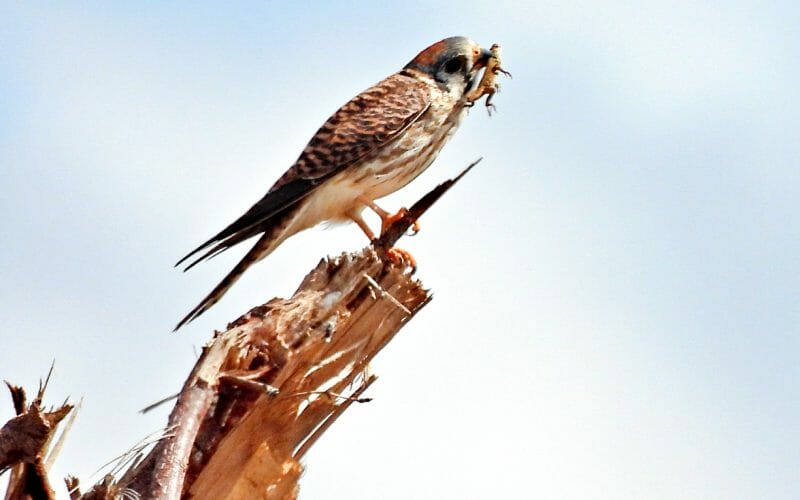 Illinois Birds of Prey: Top 16 Most Common Bird of Prey with Pictures

A bird of prey, also known as a raptor, is any bird that pursues other animals

Woodpeckers in New York: 11 Most Common Species with Pictures

New York is most notable for its grand architecture and museums

Owls in Kansas: Top 8 Most Common Owls You Can See with Pictures

The name of the State of Kansas comes from the Kanza tribe of the Sioux family, 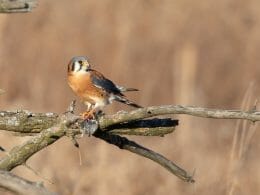 Colorado Birds of Prey: 17 Most Common Species with Pictures

The State of Colorado is known for its rich wildlife variety, especially when it 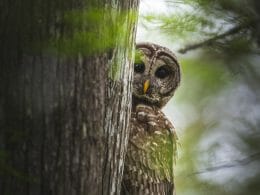 The 13 Most Common Owls in Texas with Photos

With over 630 documented species of birds in Texas, the Lone Star State is